Writing the Revolution: Wikipedia and the Survival of Facts in the Digital Age (Paperback) 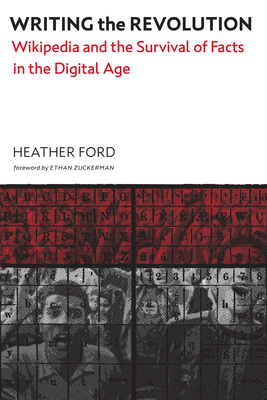 Writing the Revolution: Wikipedia and the Survival of Facts in the Digital Age (Paperback)


Not On Our Shelves—Ships in 1-5 Days
A close reading of Wikipedia’s article on the Egyptian Revolution reveals the complexity inherent in establishing the facts of events as they occur and are relayed to audiences near and far.

Wikipedia bills itself as an encyclopedia built on neutrality, authority, and crowd-sourced consensus. Platforms like Google and digital assistants like Siri distribute Wikipedia’s facts widely, further burnishing its veneer of impartiality. But as Heather Ford demonstrates in Writing the Revolution, the facts that appear on Wikipedia are often the result of protracted power struggles over how data are created and used, how history is written and by whom, and the very definition of facts in a digital age.

In Writing the Revolution, Ford looks critically at how the Wikipedia article about the 2011 Egyptian Revolution evolved over the course of a decade, both shaping and being shaped by the Revolution as it happened. When data are published in real time, they are subject to an intense battle over their meaning across multiple fronts. Ford answers key questions about how Wikipedia’s so-called consensus is arrived at; who has the power to write dominant histories and which knowledges are actively rejected; how these battles play out across the chains of circulation in which data travel; and whether history is now written by algorithms.
Heather Ford is Associate Professor and Head of Discipline for Digital and Social Media, School of Communication, University of Technology Sydney.