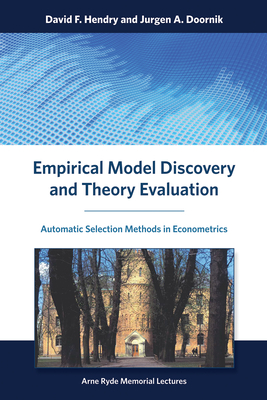 Economic models of empirical phenomena are developed for a variety of reasons, the most obvious of which is the numerical characterization of available evidence, in a suitably parsimonious form. Another is to test a theory, or evaluate it against the evidence; still another is to forecast future outcomes. Building such models involves a multitude of decisions, and the large number of features that need to be taken into account can overwhelm the researcher. Automatic model selection, which draws on recent advances in computation and search algorithms, can create, and then empirically investigate, a vastly wider range of possibilities than even the greatest expert. In this book, leading econometricians David Hendry and Jurgen Doornik report on their several decades of innovative research on automatic model selection.

After introducing the principles of empirical model discovery and the role of model selection, Hendry and Doornik outline the stages of developing a viable model of a complicated evolving process. They discuss the discovery stages in detail, considering both the theory of model selection and the performance of several algorithms. They describe extensions to tackling outliers and multiple breaks, leading to the general case of more candidate variables than observations. Finally, they briefly consider selecting models specifically for forecasting.

David F. Hendry is Professor of Economics and Director of the Program in Economic Modeling, Institute for New Economic Thinking at the Oxford Martin School, University of Oxford.

Jurgen A. Doornik is James Martin Fellow, Institute for New Economic Thinking, at the Oxford Martin School, University of Oxford, and a Director of OxMetrics Technologies Ltd.