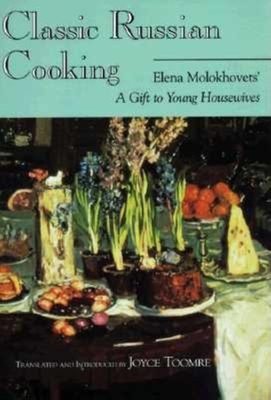 Joyce Toomre . . . has accomplished an enormous task, fully on a par with the original author's slave labor. Her extensive preface and her detailed and entertaining notes are marvelous. --Tatyana Tolstaya, New York Review of Books

Classic Russian Cooking is a book that I highly recommend. Joyce Toomre has done a marvelous job of translating this valuable and fascinating source book. It's the Fanny Farmer and Isabella Beeton of Russia's 19th century. --Julia Child, Food Arts

This is a delicious book, and Indiana University Press has served it up beautifully. --Russian Review

. . . should become as much of a classic as the Russian original . . . dazzling and admirable expedition into Russia's kitchens and cuisine. --Slavic Review

It gives a delightful and fascinating picture of the foods of pre-Communist Russia. --The Christian Science Monitor

First published in 1861, this bible of Russian homemakers offered not only a compendium of recipes, but also instructions about such matters as setting up a kitchen, managing servants, shopping, and proper winter storage. Joyce Toomre has superbly translated and annotated over one thousand of the recipes and has written a thorough and fascinating introduction which discusses the history of Russian cuisine and summarizes Molokhovets' advice on household management. A treasure trove for culinary historians, serious cooks and cookbook readers, and scholars of Russian history and culture.

Joyce Toomre, a Slavicist and culinary historian, is coeditor (with Musya Glants) of Food in Russian History and Culture.