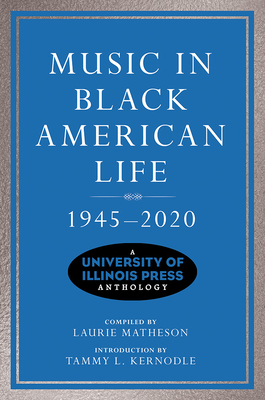 
In Stock—Click for Locations
This second volume of Music in Black American Life offers research and analysis that originally appeared in the journals American Music and Black Music Research Journal, and in two book series published by the University of Illinois Press: Music in American Life, and African American Music in Global Perspective. In this collection, a group of predominately Black scholars explores a variety of topics with works that pioneered new methodologies and modes of inquiry for hearing and studying Black music. These extracts and articles examine the World War II jazz scene; look at female artists like gospel star Shirley Caesar and jazz musician-arranger Melba Liston; illuminate the South Bronx milieu that folded many forms of black expressive culture into rap; and explain Hamilton's massive success as part of the "tanning" of American culture that began when Black music entered the mainstream.

Laurie Matheson is the director of the University of Illinois Press and longtime editor of the series Music in American Life.
"Each of these chapters unearth, explore, and explain ideas, facts, events, phenomena, and records that have been neglected, forgotten, ignored, falsified or were unknown. They invoke musicological contexts that are grounded in archival and ethnographical research that illuminates the evolution of black music-making as it shifts from the insularity of communal spaces to the public medium of popular culture and precipitated the aberration of racial, social, and gender norms."--Tammy L. Kernodle, from the Introduction