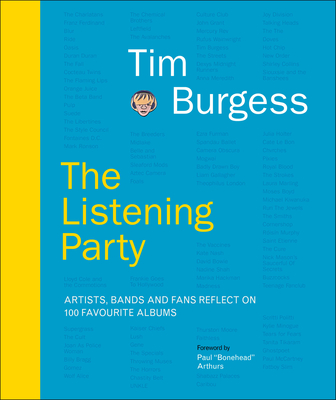 
Not On Our Shelves—Ships in 1-5 Days
The Charlatans’ Tim Burgess invites you to the greatest listening party of all time.

In 2020 when the world was forced to hit pause on live in-person gigs, Tim Burgess found an ingenious way to bring people together by inviting artists and bands, from Paul McCartney and New Order to Michael Kiwanuka and Kylie, to host real-time album playbacks via Twitter.

Relive 100 of the most memorable listening parties here with stories from bands and fans, rarely seen backstage images, and unique insider info from those who created these iconic albums.

"Hey Twitter, let's all say a big thanks to Tim for these brilliant events this year! We really needed them. So much great music being talked about.'" - Sir Paul McCartney

"Twitter being used for something really positive." - Mary Beard
In 2020 Tim Burgess released a new solo album called I Love The New Sky. The record's title is an apt summation of his creative outlook as Burgess constantly looks to new artistic horizons. As frontman of the band The Charlatans, the Northwich native has enjoyed international acclaim for over two decades, while also publishing several books and founding record label O Genesis. Additionally, Burgess has launched a coffee brand, inspired a new breakfast cereal, and pioneered and curated the communal album experience that is the Listening Party.
"A sure hit with fans of Burgess’s listening parties and those interested in behind-the-scenes dish on music, musicians, songwriting, and the industry." –Library Journal