In Love with Movies: From New Yorker Films to Lincoln Plaza Cinemas (Paperback) 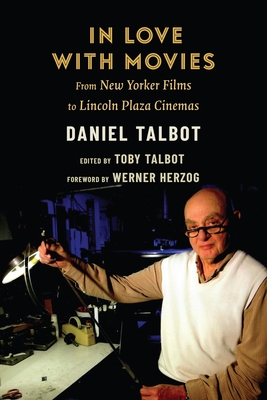 In Love with Movies: From New Yorker Films to Lincoln Plaza Cinemas (Paperback)


In Stock—Click for Locations
"All that I do is go out and look at films and choose the ones I want to play--films that stimulate, and give some insight into our lives. I hope that people will come, but if they don't, that's okay too." Daniel Talbot changed the way the Upper West Side--and art-house audiences around the world--went to the movies. In Love with Movies is his memoir of a rich life as the impresario of the legendary Manhattan theaters he owned and operated and as a highly influential film distributor. Talbot and his wife, Toby, opened the New Yorker Theater in 1960, cultivating a loyal audience of film buffs and cinephiles. He went on to run several theaters including Lincoln Plaza Cinemas as well as the distribution company New Yorker Films, shaping the sensibilities of generations of moviegoers. The Talbots introduced American audiences to cutting-edge foreign and independent filmmaking, including the French New Wave and New German Cinema. In this lively, personal history of a bygone age of film exhibition, Talbot relates how he discovered and selected films including future classics such as Before the Revolution, Shoah, My Dinner with Andre, and The Marriage of Maria Braun. He reminisces about leading world directors such as Semb ne, Godard, Fassbinder, Wenders, Varda, and Kiarostami as well as industry colleagues with whom he made deals on a slip of paper or a handshake. In Love with Movies is an intimate portrait of a tastemaker who was willing to take risks. It not only lays out the nuts and bolts of running a theater but also tells the story of a young cinephile who turned his passion into a vibrant cultural community.
Daniel Talbot (1926-2017) founded and ran the New Yorker Theater, Cinema Studio, Metro Theater, and Lincoln Plaza Cinemas as well as the distribution company New Yorker Films. Born in the Bronx, he was an Upper West Sider for almost sixty years. Toby Talbot is the author of The New Yorker Theater and Other Scenes from a Life at the Movies (Columbia, 2009). She has taught Spanish and Latin American literature at Columbia and New York University and documentary film at the New School, and has translated numerous works from Spanish, including Jacobo Timerman's Prisoner Without a Name, Cell Without a Number.