Kill the Documentary: A Letter to Filmmakers, Students, and Scholars (Paperback) 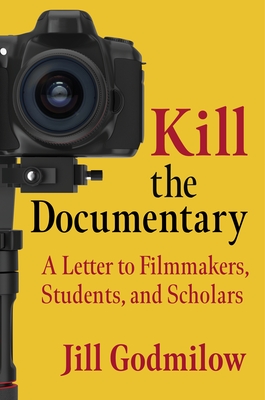 Kill the Documentary: A Letter to Filmmakers, Students, and Scholars (Paperback)


Not On Our Shelves—Ships in 1-5 Days
Can the documentary be useful? Can a film change how its viewers think about the world and their potential role in it? In Kill the Documentary, the award-winning director Jill Godmilow issues an urgent call for a new kind of nonfiction filmmaking. She critiques documentary films from Nanook of the North to the recent Ken Burns/Lynn Novick series The Vietnam War. Tethered to what Godmilow calls the "pedigree of the real" and the "pornography of the real," they fail to activate their viewers' engagement with historical or present-day problems. Whether depicting the hardships of poverty or the horrors of war, conventional documentaries produce an "us-watching-them" mode that ultimately reinforces self-satisfaction and self-absorption. In place of the conventional documentary, Godmilow advocates for a "postrealist" cinema. Instead of offering the faux empathy and sentimental spectacle of mainstream documentaries, postrealist nonfiction films are acts of resistance. They are experimental, interventionist, performative, and transformative. Godmilow demonstrates how a film can produce meaningful, useful experience by forcefully challenging ways of knowing and how viewers come to understand the world. She considers her own career as a filmmaker as well as the formal and political strategies of artists such as Luis Bu uel, Georges Franju, Harun Farocki, Trinh T. Minh-ha, Rithy Panh, and other directors. Both manifesto and guidebook, Kill the Documentary proposes provocative new ways of making and watching films.
Jill Godmilow is professor emerita in the Department of Film, Television, and Theatre at the University of Notre Dame. Her acclaimed films include the Academy Award-nominated Antonia: A Portrait of The Woman (1974); Waiting for the Moon (1987), which won best feature film at the Sundance Film Festival; and What Farocki Taught, which was featured at the 2000 Whitney Biennial.