Martha Washington's Booke of Cookery and Booke of Sweetmeats (Paperback) 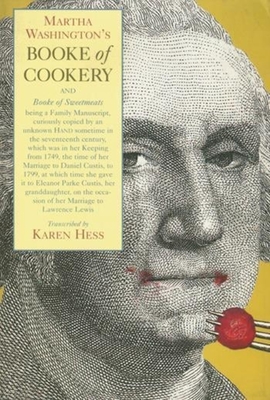 Martha Washington's Booke of Cookery and Booke of Sweetmeats (Paperback)

Martha Washington's recipes. Over five hundred classics dating from the Elizabethan and Jacobean times, are gathered in this family cookbook that captures the essence of early American folk culture. Handed down as a manuscript cookbook for generations, Martha Washington's Book of Cookery has been annotated by Karen Hess, a noted culinary historian and cook. "Amerian cookery is a tapestry of extraordinary complex design, reflecting out rich and varied ethnic origins, our New World produce, and our frontier history," writes Hess in her Introduction. For the historian, she documents early American cookery with prose and photographs of Washington's original manuscript and an appendix detailing extensive primary-source research. For the cook, she explains terms and techniques unfamiliar to the modern kitchen, showing how to make old fashioned recipes the traditional way, such as: rose petal vinegar, Oxford Kate's sausages, roast capon with oysters, mince pie, fried pudding, almond butter ginger bread, apple cider. In In paperback for the first time, Martha Washington's "Booke of Cookery" is both a significant primary resource for historians and the perfect gift for enthusiastic cooks and fans of the culinary arts.

Karen Loft Hess (November 11, 1918-May 15, 2007) was an American culinary historian. Her 1977 book The Taste of America, co-authored with her late husband, John L. Hess, established them as antiestablishment members of the culinary world. In 1985, Hess became one of the founding members of the Culinary Historians of New York, an association of food professionals, historians, and others interested in studying and writing on the history of food. On October 19, 2004, the Culinary Historians of New York presented her with their first annual Amelia Award, an award which recognizes excellence in culinary history. In 2006, she was listed in the eighth annual Saveur 100, from Saveur Magazine, in an article by Shane Mitchell entitled "The Grandest Dame of American Culinary History." Mitchell says that although Hess came from Nebraska, her "soul must be Southern." Hess's The Carolina Rice Kitchen is the story of how rice from Africa became a South Carolina Low Country staple, as well as how the African cooks shaped Southern cooking.