Reforming the Humanities: Literature and Ethics from Dante Through Modern Times (Hardcover) 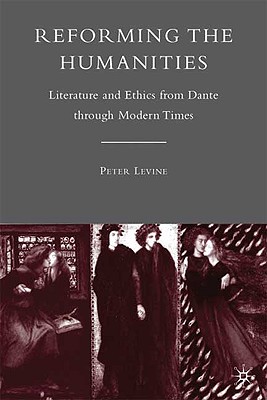 Reforming the Humanities: Literature and Ethics from Dante Through Modern Times (Hardcover)


Not On Our Shelves—Ships in 1-5 Days
Through an analysis of Dante's story of Paolo and Francesco, this book combines contemporary ethical theory, literary interpretation, and historical narrative to defend the humanities as a source of moral guidance.
PETER LEVINE is Director of CIRCLE, The Center for Information and Research on Civic Learning and Engagement and Research director of Tufts University's Jonathan Tisch College of Citizenship and Public Service, USA and author of The Future of Democracy: Developing the Next Generation of American Citizens, among other books.

“Levine has written an erudite, balanced, insightful book integrating moral philosophy and literary interpretation. His choice of Dante's story of Francesca and Paolo is inspired, enabling him to illustrate his methodological and substantive points with a literary masterpiece. If anyone doubts that literature is ethical or that ethics can benefit from literature, this book will prove him wrong. I see here the beginnings of a new and promising humanistic discipline—narrative ethics.”—Colin McGinn, Professor of Philosophy, University of Miami

“The virtues of this book are many: it makes clear and compelling arguments for moderate particularism and historicism in moral reasoning, it deftly shows how Dante himself pursued these goals despite his own penchant for moral universalism, it generously but insistently illustrates the limitations of extremity (in particularism, historicism, and also universalism) through wide-ranging references to periods in art, literature, music, and philosophy, and it finally allies itself with a still burgeoning humanistic revival led by literary critics and moral philosophers. The author’s learnedness and intellectual curiosity are on display on every page…Philosophers and literary critics have much more to learn from each other right now. In the humanities, we dwell too much on what to read and how to read, but too little on why to read. This book offers a distinctive and compelling answer to that last question.”—Daniel S. Malachuk, Western Illinois University and author of Perfection, the State, and Victorian Liberalism