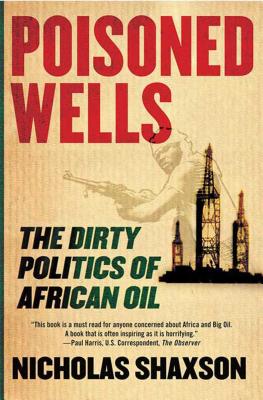 Each week the oil and gas fields of sub-Saharan Africa produce well over a billion dollars' worth of oil, an amount that far exceeds development aid to the entire African continent. Yet the rising tide of oil money is not promoting stability and development, but is instead causing violence, poverty, and stagnation. It is also generating vast corruption that reaches deep into American and European economies. In Poisoned Wells, Nicholas Shaxson exposes the root causes of this paradox of poverty from plenty, and explores the mechanisms by which oil causes grave instabilities and corruption around the globe. Shaxson is the only journalist who has had access to the key players in African oil, and is willing to make the connections between the problems of the developing world and the involvement of leading global corporations and governments.

Nicholas Shaxson is a journalist who has written for the Financial Times, The Economist Group, African Energy, and the insider newsletter Africa Confidential. He is the author of the highly acclaimed Poisoned Wells: The Dirty Politics of African Oil and an associate fellow with the Royal Institute of International Affairs in London.

“Shaxson argues convincingly that the failed oil states of Africa will be the next Great Game in a world still addicted to oil and increasingly willing to fight for it. This book is a must read for anyone concerned about Africa and Big Oil. Shaxson's obvious love for the continent and its people comes clearly through in his writing but does not temper his revulsion at the complex and bloody mess he found there. He digs deeply to uncover the real story beneath the headlines and to eloquently explain an Alice in Wonderland world of money, corruption, war and intrigue. It is a story well told that has the power to stun even the most hardened observer of Africa's tragedy. Yet at the same time Shaxson powerfully describes people who have battled against the corrupt, the venal and the just plain evil, making a book that is often as inspiring as it is horrifying. Mixing the personal and political, he has written a compelling story that explains one of the most baffling riddles of the modern world: why has oil become a curse for Africa, not a blessing?” —Paul Harris, US Correspondent, The Observer

“Nicholas Shaxson has traveled to some of the most dangerous and dysfunctional nations on the planet, delved into the murky depths of the African oil business and emerged with a grisly but compelling tale of greed, corruption, and violence. There are still some who believe that oil can rescue Africa from poverty at the same time as saving America from its fatal dependence on suppliers in the Middle East. In this remarkable book, the fruit of years of painstaking research, Shaxson exposes oil as a destroyer, not a savior, of all that is best in Africa.” —Victor Mallet, Asia editor, Financial Times, and author of The Trouble with Tigers: The Rise and Fall of South-East Asia

“This is a splendid book about a crucial subject. We need oil. We want the countries that sell it to us to be stable. But oil itself destabilizes them, unless they were mature democracies before they discovered it. Nicholas Shaxson has put in more legwork in wrecked African petro-states than any other reporter I can think of. The result is a cracking tale of blood, champagne and the 'Devil's excrement.'” —Robert Guest, former Africa editor, The Economist, and author of The Shackled Continent

“This book will be unsettling for those with preconceived ideas about the oil industry, international business or African politics. Shaxson shows that there are no easy answers to questions on the role of multinational oil giants in Africa, or how to tackle the corruption that is often the result of their oil deals. He shows there are many, many complicated shades of grey--but he does so, thankfully, using such a colorful style and language that the book comes to life and is a pleasure to read.” —Hugh Williamson, Berlin correspondent, Financial Times

“[A] highly readable and provocative book... Devoid of social science jargon, the narrative in this engaging, informative book reads like a novel, making it accessible to a wide audience... Highly recommended.” —CHOICE