We All Wore Stars: Memories of Anne Frank from Her Classmates (Paperback) 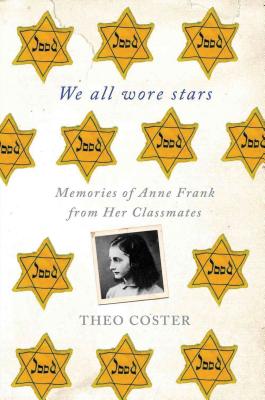 We All Wore Stars: Memories of Anne Frank from Her Classmates (Paperback)

In 1941, Theo Coster was a student at the Amsterdam Jewish Lyceum, 1 in a class of 28 Jewish children that the Nazis had segregated from the rest of the Dutch population. Among Theo's fellow students was a young Anne Frank, whose diary would later become one of the most important documents of the Holocaust. In this remarkable group portrait, Coster and five of his fellow classmates gather their personal stories and memories of Anne. The accounts collected here do not just help us to rediscover Anne Frank. They also stand on their own as remarkable stories of ingenuity and survival during the Holocaust—from Albert Gomes de Mesquita, who hid in ten different towns across Europe—to Hannah Goslar, who experienced the horrors of Bergen-Belsen but also made a miraculous reconnection with Anne days before her death.

Theo Coster was a classmate and friend of Anne Frank at the Amsterdam Jewish Lyceum. A toymaker and game designer, he is executive producer of the documentary film The Classmates of Anne Frank and the author of We All Wore Stars. Coster has lived in Tel Aviv since 1955.

“Coster managed to track down several surviving classmates for reminiscing, revealing stories as freshly searing as when they first occurred. Several of the survivors who had also ended up in Bergen-Belsen, like Anne, actually spoke to her there, and were impressed by her conviction to survive the war. All speak of Anne's vivacity and spirit, although they reveal some resentment of her singular fame. Details reveal the enormous pressure on the children in hiding to be quiet and not make trouble, and the absolute lack of professional help after the war in easing the emotional trauma. The moving lore around the life of Anne Frank remains inexhaustible and eternal.” —Kirkus

“This book introduces readers to a remarkable group of people who remember Anne as vain and generous, ordinary and creative, rebellious and precocious. Noting that the situation caused children to grow up quickly, this book becomes a tribute to their resilience. This is a wonderful chance for readers to learn more about Anne Frank as well as to meet other children who survived.” —Jewish Book World

“By highlighting the experiences of those who shared her school days and survived the war, Theo Coster helps us to see Anne alive in her community, one child among the millions touched so dramatically by evil. Their tales of survival offer a poignant and inspiring contrast to Anne's horrifying death.” —Ben Barkow, Director, The Wiener Library Institute of Contemporary History