Creatures of the Deep: In Search of the Sea's Monsters and the World They Live in (Paperback) 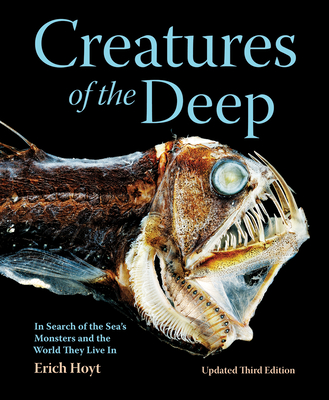 Creatures of the Deep: In Search of the Sea's Monsters and the World They Live in (Paperback)

Praise for the first edition:

More than a picture book ... Hoyt's elegant writing provides both the historical background for deep-sea exploration and an ecological perspective on life in the ocean's depths. --American Scientist

A magnificent bestiary ... and a reminder of how little we actually know about the seas surrounding us. --Popular Science

In this updated third edition of Creatures of the Deep, award-winning nature and science writer Erich Hoyt gives readers a glimpse of the amazing variety of creatures found in the deepest parts of the ocean. Weaving together details from the latest scientific research about sharks, giant squid, dragonfish, huge tube worms, clams and tiny microbes of the deep-sea vents, Hoyt embarks on a magical journey roaming across the abyssal plains and descending into deep-sea trenches more than 20,000 feet down.

Hoyt unravels the complex predator-prey relationships, from killer copepods to battles between giant squid and sperm whales, presenting compelling portraits of animals that are superbly adapted denizens of a dark high-pressure world. There are life forms, independent of sunlight and photosynthesis, which flourish around the hot, sulfurous deep-sea vents in the magnificent rift valley of the mid-ocean ridge, the world's longest mountain range. Surviving in conditions that appear to be close to the very soup of primordial Earth, these microbes have become the basis for the latest research into Earth's origins. This book is fully illustrated with fantastic underwater imagery.

Erich Hoyt has spent much of his life on or beside the sea, working with whales and dolphins and marine conservation. A noted conservationist and scientist, he has written more than 20 books including the acclaimed Orca: The Whale Called Killer, Encyclopedia of Whales, Dolphins and Porpoises, Strange Sea Creatures plus several children's books including Weird Sea Creatures and Whale Rescue. He lives in Dorset, England.