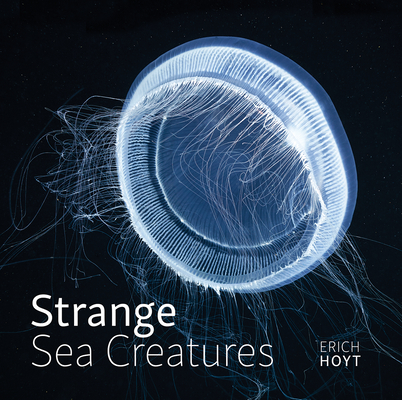 A young wunderpus octopus, staring you right in the eye, is the perfect choice for the opening spread of Eric Hoyt's latest book celebrating the oceans' wonders... Page after page, we see the surprising shapes, colors and intricate details of secretive animals -- many in their juvenile forms -- that dash to the surface on nocturnal forays. Hoyt's curated collection of images from various underwater photographers continues into the deep twilight zone and onto the seabed, showcasing the mesmerizing range of life far beneath the waves. --BBC Wildlife Magazine

Marine researchers are discovering new ocean creatures every day, especially at its deepest depths. From the author of Creatures of the Deep, Encyclopedia of Whales, Dolphins and Porpoises and other books about the ocean and the animals that live there, comes a new title about some of the most unusual marine life forms.

The book organizes the creatures into three parts based on where they live in the ocean. Informative captions accompany the 90 gorgeous photographs of otherworldly creatures.

Part 1: Surface Waters of the Ocean at Night: The Blackwater Vertical Migrators

Part 2: Middle to Deep Dark Waters: Masters of the Language of Light

Part 3. The Continental Shelf to the Abyssal Plain: The Bottom Dwellers

The photographs were taken in the ocean by expert divers and submariners, most of whom are both scientists and underwater photographers. The images display the creatures vividly against a background as black as the ocean depths.

Erich Hoyt has spent much of his life on or beside the sea, working with whales and dolphins and marine conservation in the world's oceans. A noted conservationist and scientist and an award-winning author, he has written 24 books including the acclaimed Orca: The Whale Called Killer, Insect Lives, The Earth Dwellers, Creatures of the Deep, Encyclopedia of Whales, Dolphins and Porpoises, and the children's books Weird Sea Creatures and Whale Rescue. He lives in Dorset, England.