Reclaiming Catherine of Siena: Literacy, Literature, and the Signs of Others (Hardcover) 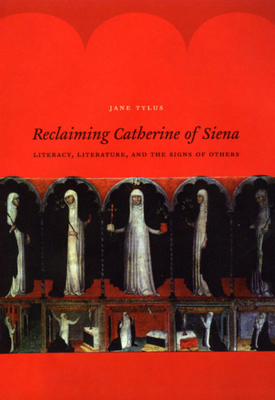 Reclaiming Catherine of Siena: Literacy, Literature, and the Signs of Others (Hardcover)


Special Order—Subject to Availability
Catherine of Siena (1347–1380) wrote almost four hundred epistles in her lifetime, effectively insinuating herself into the literary, political, and theological debates of her day. At the same time, as the daughter of a Sienese dyer, Catherine had no formal education, and her accomplishments were considered miracles rather than the work of her own hand. As a result, she has been largely excluded from accounts of the development of European humanism and the language and literature of Italy. Reclaiming Catherine ofSiena makes the case for considering Catherine alongside literary giants such as Dante and Petrarch, as it underscores Catherine's commitment to using the vernacular to manifest Christ's message—and her own.
Jane Tylus charts here the contested struggles of scholars over the centuries to situate Catherine in the history of Italian culture in early modernity. But she mainly focuses on Catherine’s works, calling attention to the interplay between orality and textuality in the letters and demonstrating why it was so important for Catherine to envision herself as a writer. Tylus argues for a reevalution of Catherine as not just a medieval saint, but one of the major figures at the birth of the Italian literary canon.

Jane Tylus is professor of Italian studies and comparative literature at New York University, where she is also faculty director of the Humanities Initiative. Her recent publications include Reclaiming Catherine of Siena: Literacy, Literature, and the Signs of Others, also published by the University of Chicago Press, and The Poetics of Masculinity in Early Modern Italy, coedited with Gerry Milligan.

“Tylus’ book is a rich and intelligent contribution to the burgeoning field of scholarship on medieval European women visionaries, building on a considerable body of work by scholars working in different disciplines. The style is often elegant—even literary—and the discussions nuanced and detailed. It suggests, convincingly, that the signs of Catherine, and of others, succeeded in making her a donna, and not a serva.”

“Catherine of Siena was one of medieval Europe’s most fascinating and important religious and political personages, male or female. Thanks to Jane Tylus, we now have a book in English that presents her in all her impressive complexity, constantly engaging the reader in Catherine’s spiritual and political mission as well as her life story. Tylus is a fine storyteller, a discerning interpreter, and a generous thinker.”

“With elegant ‘sprezzatura,’ this book proposes a radical revision of the origins of the Italian literary canon. A leading figure in an era of extraordinary political and religious importance, a woman—Catherine—now stands alongside Dante, Petrarch, and Boccaccio as a prominent vernacular writer fully aware of the significance of her writing. A provocative and innovative book, written with learning and passion.”

“This book considers Catherine of Siena from the perspective of language, especially her own Tuscan dialect, a strong vernacular Tylus argues Catherine helped to shape. Tylus nuances long-standing questions about Catherine’s ability to read and write in a completely original way. There is nothing straightforward or unproblematic about the type of literacy she proposes for Catherine, but it is entirely framed in the context of late medieval Italy, and paints a new portrait of the saint.”

“The rarity of studies as deeply learned and continually thought-provoking as Tylus’s makes it virtually unique. . . . This important contribution by a major scholar is a must for those interested in Trecento Italy, its literature, and its religion. Essential.”