Perjury and Pardon, Volume I (The Seminars of Jacques Derrida #1) (Hardcover) 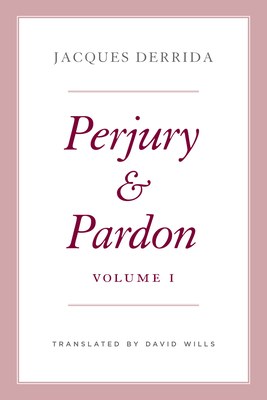 Perjury and Pardon, Volume I (The Seminars of Jacques Derrida #1) (Hardcover)


On Our Shelves Now at:
An inquiry into the problematic of perjury, or lying, and forgiveness from one of the most influential philosophers of the twentieth century.

“One only ever asks forgiveness for what is unforgivable.” From this contradiction begins Perjury and Pardon, a two-year series of seminars given by Jacques Derrida at the École des hautes études en sciences sociales in Paris in the late 1990s. In these sessions, Derrida focuses on the philosophical, ethical, juridical, and political stakes of the concept of responsibility. His primary goal is to develop what he calls a “problematic of lying” by studying diverse forms of betrayal: infidelity, denial, false testimony, perjury, unkept promises, desecration, sacrilege, and blasphemy.

Although forgiveness is a notion inherited from multiple traditions, the process of forgiveness eludes those traditions, disturbing the categories of knowledge, sense, history, and law that attempt to circumscribe it. Derrida insists on the unconditionality of forgiveness and shows how its complex temporality destabilizes all ideas of presence and even of subjecthood. For Derrida, forgiveness cannot be reduced to repentance, punishment, retribution, or salvation, and it is inseparable from, and haunted by, the notion of perjury. Through close readings of Kant, Kierkegaard, Shakespeare, Plato, Jankélévitch, Baudelaire, and Kafka, as well as biblical texts, Derrida explores diverse notions of the “evil” or malignancy of lying while developing a complex account of forgiveness across different traditions.

Jacques Derrida (1930–2004) was director of studies at the École des hautes études en sciences sociales, Paris, and professor of humanities at the University of California, Irvine. Several of his books have been published in their English translation by the University of Chicago Press.

Ginette Michaud is professor in the Département des littératures de langue française at the Université de Montréal.
"This volume is for strong humanities and philosophy collections."
— Library Journal

"In the two decades since Perjury and Pardon was written, the questions raised by Derrida’s prescient probing of the puzzling paradoxes of forgiveness have become even more urgent. During a time of unrepentant rage and specious pardons, what does it mean to forgive? Does anyone deserve forgiveness? Should the unforgivable be forgiven? Is it possible to live together without forgiveness? As we struggle to answer these critical questions, Derrida’s guiding insight is important today more than ever."
— Mark C. Taylor, Columbia University

"These rich stimulating lectures are classic Derrida and in David Wills's superb translation wonderfully accessible. This is a great example of Derrida the educator introducing his audience to some of the most difficult issues of our time."
— Robert Bernasconi, Penn State University

“Perjury and Pardon presents an expansive vision of responsibility with the supreme clarity and profound rigor that mark Derrida’s style as a formidable teacher across geographical and academic boundaries. Wills's unique interpretative skills have resulted in yet another unsurpassed translation of Derrida's breathtaking thought and legacy.”
— Hent de Vries, New York University