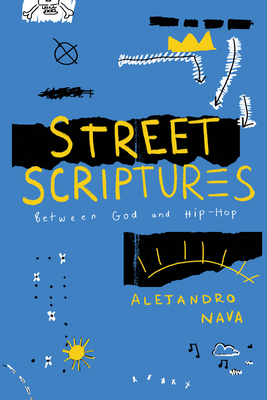 
Not On Our Shelves—Ships in 1-5 Days
This book explores an important aspect of hip-hop that is rarely considered: its deep entanglement with spiritual life.

The world of hip-hop is saturated with religion, but rarely is that element given serious consideration. In Street Scriptures, Alejandro Nava focuses our attention on this aspect of the music and culture in a fresh way, combining his profound love of hip-hop, his passion for racial and social justice, and his deep theological knowledge. Street Scriptures offers a refreshingly earnest and beautifully written journey through hip-hop’s deep entanglement with the sacred.

Nava reveals a largely unheard religious heartbeat in hip-hop, exploring crosscurrents of the sacred and profane in rap, reggaeton, and Latinx hip-hop today. Ranging from Kendrick Lamar, Chance the Rapper, Lauryn Hill, Cardi B, and Bad Bunny to St. Augustine and William James, Nava examines the ethical-political, mystical-prophetic, and theological qualities in hip-hop, probing the pure sonic and aesthetic signatures of music, while also diving deep into the voices that invoke the spirit of protest. The result is nothing short of a new liberation theology for our time, what Nava calls a “street theology.”
Alejandro Nava is professor of religious studies at the University of Arizona. He is the author of The Mystical and Prophetic Thought of Simone Weil and Gustavo Gutiérrez, Wonder and Exile in the New World, and In Search of Soul. He has discussed hip-hop and religion on NPR, Fox News, HuffPost Live, and MSNBC, among other outlets.

"Nava introduces an intervention into the excesses and shortcomings of two of the major theological movements of the 20th century: Latin American liberation theology and Hans Urs von Balthasar’s theology of beauty, the via pulchritudinis. He notes how liberation theology underdetermined beauty as a suspicious distraction from social justice, while the theology of beauty, in liturgy and beyond, overdetermined beauty through a fixed cultural lens. . . . This erudition and range make the book’s most compelling case for itself."
— America Magazine

"Nava explores the connections between religion and hip-hop, revealing the overlooked theological roots of the genre and its potential to change the world."
— US Catholic Magazine, "What We're Reading"

"With this majestic study, Nava reclaims ‘the streets’ as a living, breathing text, through which black and brown youth transmute everyday terror into spiritual beauty and hurl truth on the doorsteps of power. By placing academic theology and urban hip-hop culture side by side, Nava’s work has the potential to usher both into a more liberating future.”
— Onaje X. O. Woodbine, author of 'Black Gods of the Asphalt: Religion, Hip-Hop, and Street Basketball'

“Nava’s writing pulses with passion—electric, vivid, joyful, and oh so readable. By immersing the reader in the music, Nava offers the most compelling lens available on exactly how hip-hop created a moral aesthetic that moves people to change the world. Street Scriptures is social criticism of the highest order.”
— Jonathon Kahn, author of 'Divine Discontent: The Religious Imagination of W. E. B. Du Bois'

“In this compelling work, Nava reads the radically subversive ‘street scriptures’ of hip-hop as a distinctive form of urban liberation theology. This elegantly argued book by a scholar and activist is an important contribution to the study of urban religion and of ‘religion’ itself in one of its most powerful and challenging contemporary instantiations.”
— Robert Orsi, author of 'History and Presence'