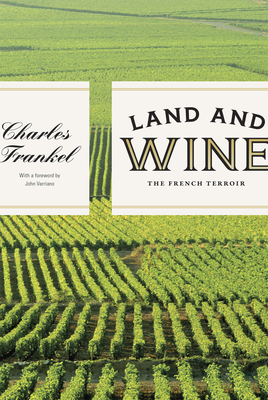 
In Stock—Click for Locations
A tour of the French winemaking regions to illustrate how the soil, underlying bedrock, relief, and microclimate shape the personality of a wine.

For centuries, France has long been the world’s greatest wine-producing country. Its wines are the global gold standard, prized by collectors, and its winemaking regions each offer unique tasting experiences, from the spice of Bordeaux to the berry notes of the Loire Valley. Although grape variety, climate, and the skill of the winemaker are essential in making good wine, the foundation of a wine’s character is the soil in which its grapes are grown. Who could better guide us through the relationship between the French land and the wine than a geologist, someone who deeply understands the science behind the soil? Enter scientist Charles Frankel.

In Land and Wine, Frankel takes readers on a tour of the French winemaking regions to illustrate how the soil, underlying bedrock, relief, and microclimate shape the personality of a wine. The book’s twelve chapters each focus in-depth on a different region, including the Loire Valley, Alsace, Burgundy, Champagne, Provence, the Rhône valley, and Bordeaux, to explore the full meaning of terroir.  In this approachable guide, Frankel describes how Cabernet Franc takes on a completely different character depending on whether it is grown on gravel or limestone; how Sauvignon yields three different products in the hills of Sancerre when rooted in limestone, marl, or flint; how Pinot Noir will give radically different wines on a single hill in Burgundy as the vines progress upslope; and how the soil of each château in Bordeaux has a say in the blend ratios of Merlot and Cabernet-Sauvignon. Land and Wine provides a detailed understanding of the variety of French wine as well as a look at the geological history of France, complete with volcanic eruptions, a parade of dinosaurs, and a menagerie of evolution that has left its fossils flavoring the vineyards.

Both the uninitiated wine drinker and the confirmed oenophile will find much to savor in this fun guide that Frankel has spiked with anecdotes about winemakers and historic wine enthusiasts—revealing which kings, poets, and philosophers liked which wines best—while offering travel tips and itineraries for visiting the wineries today.
Born in Paris, Charles Frankel is a science writer and lecturer specializing in geology and planetary exploration. His books include The End of the Dinosaurs: Chicxulub Crater and Mass Extinctions and Worlds on Fire.
“Charles Frankel’s Land and Wine recounts the story of wine in France from a unique geological perspective, highlighting the influence of the land and soil on the quality and style of the wines. In doing so, Frankel demystifies the idea of ‘terroir’ and offers approachable anecdotes that will entertain and appeal to wine enthusiasts. “

“Geologist Charles Frankel’s Land and Wine: The French Terroir is not so  much a scientific exposé as it is a beautifully described love triangle involving wine, rocks, and French history. With stories of Charles the Fat (839 to 888 CE), Philip the Bold (1342 to 1404), and Joan of Arc (1412 to 1431), each a contributor to the development of different wine regions, one cannot help but be entranced by this delightful interplay of history, wine, and the geologic evolution of the European continent.”
— Science

“A celebration of both science and art, the book demystifies the perplexities of wine—and the pretensions of so much wine-writing—in a manner as refreshing to the reader as tasting a crisp bottle of Sancerre, while learning its origins lie deep in Jurassic, Cretaneous, and Tertiary bedrock.”
— John Varriano, from the Foreword

“Can one really relate geology to taste? Most certainly. Land and Wine: The French Terroir is an intriguing book. For those who love dinosaurs and drinking wine, or who seek to gain deeper, more profoundly thoughtful and complex pleasures from within a bottle, this book is a must read.”
— Marc Millon, author of Wine: A Global History

“Not just another wine book, this volume by French geologist Frankel is about the geology that differentiates one French wine from another. . . . This work will cultivate oenophiles’ interest in geology and vice versa. Both a fascinating introduction to the geology of France that will satisfy wine lovers with plentiful descriptions of beverages and wineries and a perfect textbook for anyone pursuing a sommelier’s pin.”
— Library Journal

“Frankel takes readers on what might be called a tour de terroir, a swift, chatty, and generally readable survey of French wherenesses, the famous and not-so-famous places where French fine wine is sourced.”
— Boston Globe

“A geologist by profession, Frankel has a fluent amateur’s enthusiasm for a tour around a vineyard; managing to find plenty of viticulteurs for inclusion in the book as keen as he is, displaying their soils and subsoils in proud tasting-room glass cases. Frankel tours France’s wine-making regions not following Hugh Johnson & Jancis Robinson’s canonical and gazillion-selling Wine Atlas, but instead using as a guide the eras of geological time. Sounds a bit academic and dull? It’s definitely not.”
— Independent

“I have never encountered a book quite like this one. In careful detail, it tells the geological history of France, at each point linking the character of the country’s wines to the underlying geology of the land on which the grapes are grown. The story proceeds chronologically, starting 500 million years ago, when great oceans were swallowed up during tectonic shifts, and ends just 10,000 years ago, at the moment when the Strait of Gibraltar broke open and the Mediterranean ceased to be an inland sea. Throughout, one is struck by the violence and diver­sity of geological change and by the overarching lesson that few things are as essential to a place as its terroir.”
— Foreign Affairs