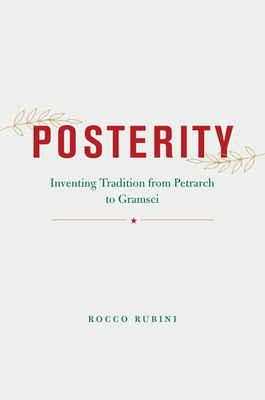 
Not On Our Shelves—Ships in 1-5 Days
Reading a range of Italian works, Rubini considers the active transmittal of traditions through generations of writers and thinkers.

Rocco Rubini studies the motives and literary forms in the making of a “tradition,” not understood narrowly, as the conservative, stubborn preservation of received conventions, values, and institutions, but instead as the deliberate effort on the part of writers to transmit a reformulated past across generations. Leveraging Italian thinkers from Petrarch to Gramsci, with stops at prominent humanists in between—including Giambattista Vico, Carlo Goldoni, Francesco De Sanctis, and Benedetto Croce—Rubini gives us an innovative lens through which to view an Italian intellectual tradition that is at once premodern and modern, a legacy that does not depend on a date or a single masterpiece, but instead requires the reader to parse an expanse of writings to uncover deeper transhistorical continuities that span six hundred years. Whether reading work from the fourteenth century, or from the 1930s, Rubini elucidates the interplay of creation and the reception underlying the enactment of tradition, the practice of retrieving and conserving, and the revivification of shared themes and intentions that connect thinkers across time. Building on his award-winning book, The Other Renaissance, this will prove a valuable contribution for intellectual historians, literary scholars, and those invested in the continuing humanist legacy.

Rocco Rubini is associate professor of Italian in the Department of Romance Languages and Literatures at the University of Chicago, with joint appointments in the Committee on Theater and Performance Studies and in the Fundamentals Program. He is the author of The Other Renaissance: Italian Humanism between Hegel and Heidegger, also published by the University of Chicago Press.

“Rubini is remarkable in his double competence, both as a historian of literary art who is sensitive to aesthetic creation and as an intellectual historian who defines novel trends and modes of inquiry practices. With considerable ingenuity, Rubini describes the autobiographical as defining Italian Humanism, drawing a distinction between Humanism as inquiry and Renaissance as domain.”
— Nancy S. Struever, Johns Hopkins University

“Posterity is commendable for the constellation of authors it proposes, presenting the reader with unexpected combinations and drawing new trajectories from author to author. Rubini impressively combines different readings and introduces canonical Italian figures in the global debate. This is a work that will appeal to intellectual historians and scholars of Italy across many disciplines.”
— Eleonora Stoppino, University of Illinois at Urbana-Champaign

“This marvelous book explores intricate links between Petrarchan hermeneutics and Renaissance humanism, as well as the endurance and adaptability of both to modern and postmodern thought. Its argument unfolds as an adventure of transhistorical magnitude, propelling the past into the present and beyond to the future with powerful effect. Rubini everywhere brings passion and enthusiasm to bear upon analyzing, interpreting, and evaluating nineteenth- and twentieth-century literary theory and practice.”
— William J. Kennedy, Avalon Foundation Professor Emeritus in the Humanities, Cornell University

“Beginning with a bravura reinterpretation of Petrarch and his place in literary history, Rubini suggests that reciprocity between reading and writing, interpreter and object of interpretation, present and past—serves as the key element allowing literature to live and thus to become more than soul-deadening antiquarianism. For Rubini, Petrarch foresaw that posterity would allow continual interpretation and reinterpretation of his work, pointing toward a future in which later interpreters would reveal more about (and draw more from) his work than his contemporaries ever could do. It is a provocative, timely, and fascinating book.”
— Christopher S. Celenza, Johns Hopkins University