Making a Mantra: Tantric Ritual and Renunciation on the Jain Path to Liberation (Class 200: New Studies in Religion) (Paperback) 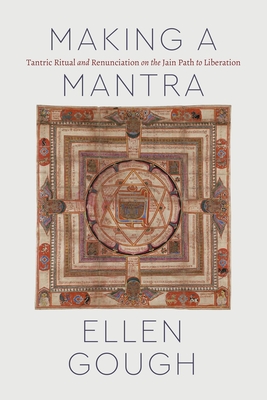 Making a Mantra: Tantric Ritual and Renunciation on the Jain Path to Liberation (Class 200: New Studies in Religion) (Paperback)


Not On Our Shelves—Ships in 1-5 Days
Jainism originated in India and shares some features with Buddhism and Hinduism, but it is a distinct tradition with its own key texts, art, rituals, beliefs, and history. One important way it has often been distinguished from Buddhism and Hinduism is through the highly contested category of Tantra: Jainism, unlike the others, does not contain a tantric path to liberation. But in Making a Mantra, historian of religions Ellen Gough refines and challenges our understanding of Tantra by looking at the development over two millennia of a Jain incantation, or mantra, that evolved from an auspicious invocation in a second-century text into a key component of mendicant initiations and meditations that continue to this day.

Typically, Jainism is characterized as a celibate, ascetic path to liberation in which one destroys karma through austerities, while the tantric path to liberation is characterized as embracing the pleasures of the material world, requiring the ritual use of mantras to destroy karma. Gough, however, argues that asceticism and Tantra should not be viewed in opposition to one another. She does so by showing that Jains perform “tantric” rituals of initiation and meditation on mantras and maṇḍalas. Jainism includes kinds of tantric practices, Gough provocatively argues, because tantric practices are a logical extension of the ascetic path to liberation.
Ellen Gough is assistant professor of religion at Emory University.
“The book is good to think with . . . . The historical reality is often more complex than our scholarly categorizations allow for, and Making a Mantra makes an excellent case for critically engaging with them anew, by bringing the ascetic perspective into the heart of tantric studies and granting Jainism a place in it.”
— Indo-Iranian Journal

“In this pioneering study, Gough traces the long biography of a key Jain mantra from ancient times up to the present. By showing how medieval Jains came to ‘tantricize’ the mantra, she makes important contributions to the study of Tantra, Jainism, and, more broadly, our understanding of the history of religion in India. This is a work of wide and confident scholarship, conveyed in an accessible and compelling manner.”
— Richard Davis, Bard College

“In Making a Manta, Gough combines fine-grained textual study with ethnographic fieldwork to persuasively demonstrate that a full and adequate understanding of Jain ritual and doctrine must take serious account of the role of mantras and ma??alas throughout the tradition. This book marks a watershed moment in the study of both Tantra and Jainism—it is required reading for all students of Indian religions.”
— John E. Cort, Denison University