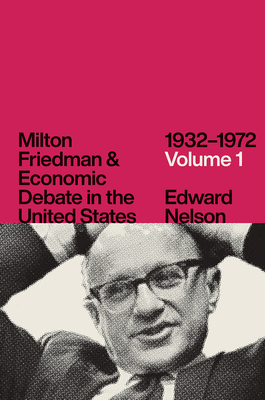 
Special Order—Subject to Availability
Milton Friedman is widely recognized as one of the most influential economists of the twentieth century. Yet no previous study has distilled Friedman’s vast body of writings into an authoritative account of his research, his policy views, and his interventions in public debate. With this ambitious new work, Edward Nelson closes the gap: Milton Friedman and Economic Debate in the United States is the defining narrative on the famed economist, the first to grapple comprehensively with Friedman’s research output, economic framework, and legacy.

This two-volume account provides a foundational introduction to Friedman’s role in several major economic debates that took place in the United States between 1932 and 1972. The first volume, which takes the story through 1960, covers the period in which Friedman began and developed his research on monetary policy. It traces Friedman’s thinking from his professional beginnings in the 1930s as a combative young microeconomist, to his wartime years on the staff of the US Treasury, and his emergence in the postwar period as a leading proponent of monetary policy. The second volume covers the years between 1960 and 1972— years that saw the publication of Friedman and Anna Schwartz’s Monetary History of the United States. The book also covers Friedman’s involvement in a number of debates in the 1960s and 1970s, on topics such as unemployment, inflation, consumer protection, and the environment.

As a fellow monetary economist, Nelson writes from a unique vantage point, drawing on both his own expertise in monetary analysis and his deep familiarity with Friedman’s writings. Using extensive documentation, the book weaves together Friedman’s research contributions and his engagement in public debate, providing an unparalleled analysis of Friedman’s views on the economic developments of his day.
Edward Nelson is an economist in the division of monetary affairs at the Board of Governors of the Federal Reserve System.
“Magisterial. . . For anyone wanting to understand the ideas that Friedman generated over his research career, this book is, and will remain for some time, the essential guide.”
— Financial World

"Edward Nelson knows more about Milton Friedman’s economics than anyone else alive. In two weighty volumes, he begins to share that knowledge with us. . . . Readers of the two chronological parts—even those who have already studied carefully Friedman’s major works—will learn much more from Nelson about the incredible breadth and diversity of Friedman’s academic research."

"Volume 1 of a two-volume set presents a composite picture of Milton Friedman’s theoretical positions and policy conclusions, how they informed his interactions with economists and policy makers, and how they shaped his commentary on economic policy in the United States, focusing on Friedman’s development as a monetarist from 1932 to 1960."
— Journal of Economic Literature

"When I read the two volume Milton Friedman and Economic Debate in the United States: 1932-1972 by Edward Nelson... I knew it would be the best book of 2021 and six months later I stand by that judgement. These books are for those with a decent understanding of economics, but armed with knowledge of the discipline."

“A fascinating book... Nelson presents a meticulously researched, exquisitely detailed exposition of Friedman’s work, ranging from his contributions to economic research to his efforts to improve public policy. This book is a definitive resource for appreciating Milton Friedman’s influence in economics and public policy.”
— Athanasios Orphanides, Massachusetts Institute of Technology

“Nelson’s entertaining and thought-provoking book is a treasure trove of information about Milton Friedman and the economic debates he engaged in. It is an essential reference for those interested in Friedman, his ideas, and his times. Even readers familiar with Friedman’s work will be sure to find new facts in Nelson’s book, such as the fascinating account of the ups and downs of Friedman’s career, which led Friedman to win the Clark Medal and the Nobel Prize for completely separate bodies of work.”
— Emi Nakamura, University of California, Berkeley

“Edward Nelson presents a new intellectual history of Friedman’s massive oeuvre, tracing Friedman’s work in detail and relating it to the issues and literature of the time. The work is highly original, and the scholarship superlative. This will be the definitive book on Milton Friedman for a long time to come.”
— Michael Bordo, Rutgers University

"While much has been written on Friedman’s career, no previous biographer has Nelson’s deep and sophisticated understanding of monetary economics. This makes his new book especially useful for those with a serious interest in policy issues, especially macro policy. While Friedman had policy views on a wide variety of issues, including the military draft and education voucher programs, Nelson focuses his attention on the areas where Friedman’s influence was greatest–the field of macroeconomics."
— Economic History