Octopus, Squid, and Cuttlefish: A Visual, Scientific Guide to the Oceans’ Most Advanced Invertebrates (Hardcover) 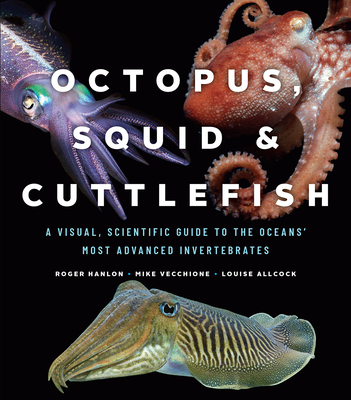 Octopus, Squid, and Cuttlefish: A Visual, Scientific Guide to the Oceans’ Most Advanced Invertebrates (Hardcover)


Not On Our Shelves—Ships in 1-5 Days
"Cephalopods are often misunderstood creatures. Three biologists set the record straight."—Science News

Largely shell-less relatives of clams and snails, the marine mollusks in the class Cephalopoda—Greek for “head-foot”—are colorful creatures of many-armed dexterity, often inky self-defense, and highly evolved cognition. They are capable of learning, of retaining information—and of rapid decision-making to avoid predators and find prey. They have eyes and senses rivaling those of vertebrates like birds and fishes, they morph texture and body shape, and they change color faster than a chameleon. In short, they captivate us.

From the long-armed mimic octopus—able to imitate the appearance of swimming flounders and soles—to the aptly named flamboyant cuttlefish, whose undulating waves of color rival the graphic displays of any LCD screen, there are more than seven hundred species of cephalopod. Featuring a selection of species profiles, Octopus, Squid, and Cuttlefish reveals the evolution, anatomy, life history, behaviors, and relationships of these spellbinding animals. Their existence proves that intelligence can develop in very different ways: not only are cephalopods unusually large-brained invertebrates, they also carry two-thirds of their neurons in their arms.

A treasure trove of scientific fact and visual explanation, this worldwide illustrated guide to cephalopods offers a comprehensive review of these fascinating and mysterious underwater invertebrates—from the lone hunting of the octopus, to the social squid, and the prismatic skin signaling of the cuttlefish.
Roger Hanlon is a senior scientist at the Marine Biological Laboratory in Woods Hole, Massachusetts, and professor of ecology and evolutionary biology at Brown University. He is coauthor of Cephalopod Behavior. Mike Vecchione is director of the National Oceanic and Atmospheric Administration Fisheries National Systematics Laboratory and an adjunct faculty member at the Virginia Institute of Marine Science. Louise Allcock is a lecturer in zoology at the National University of Ireland, Galway, president of the Cephalopod International Advisory Council, and coordinator of the International Union for Conservation of Nature red data list for Cephalopoda.
"Cephalopods are often misunderstood creatures. Three biologists set the record straight on the behaviors and evolution of these invertebrates of the sea."
— Science News

"Octopus, Squid, and Cuttlefish celebrates these animals through beautiful pictures and an encyclopedic discussion of the animals’ evolution, biology, and behaviors. . . . After reading about the cephalopods’ abilities and behaviors, as well as their potential for advancing our lives, readers might think twice before ordering their next calamari appetizer."
— American Scientist

"It’s hard to imagine anything much more comprehensive in the field, and the 150 high-quality photographs taken by many different underwater photographers underline graphically the diversity of species. . . . Their writing style is clear, consistent, and very easy for non-biologists to follow. Excellent illustrations and diagrams aid understanding where required. Whether you want to read from cover to cover, dip in, skim, or use for reference, in terms of reflecting the latest research you’re unlikely to do better than this book if you want to get the most from your next underwater encounter."
— DIVER

"Blocks of species accounts interleave text-rich chapters on cephalopod biology. The chapter topics—which include morphology, systematics, phylogeny, behavior, and human exploitation—feature clear diagrams, high-quality photographs, and narratives that will not challenge most adult readers. . . . The sum of these chapters provides a complete . . . introduction to cephalopods. The blocks of species accounts consist of colorful, full-page photographs and associated factoids of several octopus, squid, and cuttlefish species. . . . These accounts  . . . sample the remarkable array of cephalopod diversity. . . . Recommended."
— Choice