Race, Class, and Politics in the Cappuccino City (Paperback) 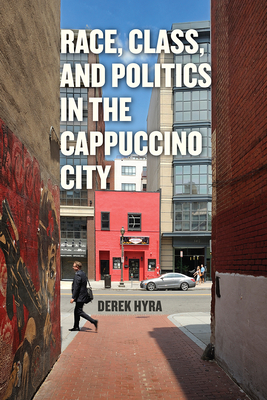 Race, Class, and Politics in the Cappuccino City (Paperback)


On Our Shelves Now at:
For long-time residents of Washington, DC’s Shaw/U Street, the neighborhood has become almost unrecognizable in recent years. Where the city’s most infamous open-air drug market once stood, a farmers’ market now sells grass-fed beef and homemade duck egg ravioli. On the corner where AM.PM carryout used to dish out soul food, a new establishment markets its $28 foie gras burger. Shaw is experiencing a dramatic transformation, from “ghetto” to “gilded ghetto,” where white newcomers are rehabbing homes, developing dog parks, and paving the way for a third wave coffee shop on nearly every block.

Race, Class, and Politics in the Cappuccino City is an in-depth ethnography of this gilded ghetto. Derek S. Hyra captures here a quickly gentrifying space in which long-time black residents are joined, and variously displaced, by an influx of young, white, relatively wealthy, and/or gay professionals who, in part as a result of global economic forces and the recent development of central business districts, have returned to the cities earlier generations fled decades ago. As a result, America is witnessing the emergence of what Hyra calls “cappuccino cities.” A cappuccino has essentially the same ingredients as a cup of coffee with milk, but is considered upscale, and is double the price. In Hyra’s cappuccino city, the black inner-city neighborhood undergoes enormous transformations and becomes racially “lighter” and more expensive by the year.
Derek S. Hyra is associate professor in the Department of Public Administration and Policy at American University. He is the author of The New Urban Renewal: The Economic Transformation of Harlem and Bronzeville, also published by the University of Chicago Press.
“Hyra’s book applies a sophisticated, academic approach to studying social tensions at the forefront of current politics, development, and culture in the District.”
— Washington Post

“Hyra’s findings in Cappuccino City present a needed challenge to the neo-liberal rhetoric that has dominated housing policy for the last few decades—that demolishing public and subsidized housing and replacing it with ‘mixed-income’ privatized housing will combat the concentration of poverty through economic and racial integration. Based on years of ethnographic research, the book provides an in-depth look at gentrification in the Shaw neighborhood. For those new to either D.C. or to gentrification scholarship, the book should be required reading.”
— Shelterforce

“The book asks difficult questions but provides no easy answers. Consequently, it is a must-read for anyone interested in gentrification, social mixing, diversity, and equity. It should provoke self-questioning and, it is hoped, also much discussion on both sides of the Atlantic.”
— Journal of Urban Affairs

“Based on six years of field research in a Washington DC community undergoing revitalization, Hyra addresses a set of innovative questions regarding neighborhood transformations. These include the role of broader political and economic forces, the decision of some whites to live in a black-branded ghetto community, the racial and class dynamics when people who had been previously segregated come together, and the gains and losses experienced by the low-income blacks who haven’t been displaced by gentrification. Race, Class, and Politics in the Cappuccino City is an insightful and compelling book. I highly recommend it not only to scholars and students, but to general readers and policymakers as well.”
— William Julius Wilson, author of The Truly Disadvantaged

“Race, Class, and Politics in the Cappuccino City is a poignant, provocative, and well-written study of the gentrification that threatens to fundamentally alter so many of the nation’s urban black ghettos, not only by displacing the poor and increasing local property values, but also by effectively changing the color of the people who reside in the inner-city. This monograph is a major contribution to our knowledge of the city.”
— Elijah Anderson, author of Code of the Street and The Cosmopolitan Canopy

“Few American cities have changed as much and as rapidly as Washington, DC, where a process of private urban revitalization has swept through countless neighborhoods. Few areas have changed as much as Shaw, once home to the nation’s preeminent African American elite, then an epicenter of a vigorous narcotics trade, and now home to ever more visible young professional millennials. Hyra takes us to the street to explore, in the words of local DC hero Marvin Gaye, what’s been going on in a neighborhood where long standing local carryouts have been replaced by $28 burgers of foie gras and lobster. Hyra shows how, for all the change, much remains the same when it comes to social, economic, and political justice. As he reveals, when it comes to gentrification, little is what it seems to be.”
— Blair Ruble, author of Washington’s U Street: A Biography

“Race, Class, and Politics in the Cappuccino City forces us to rethink long standing preconceptions about gentrification, the ghetto, and the American city in the twenty-first century. Hyra’s book shows that the causes of gentrification are more varied than we imagined and the impacts on long term residents more wide-reaching than previously thought. He casts the characters in gentrification mythology in a new light, with both gentrifiers and long term residents shown to be more complex and unpredictable in their motives and actions. This is a must-read for anyone interested in the evolution of American cities in the twenty-first century.”
— Lance Freeman, author of There Goes the ’Hood: Views of Gentrification from the Ground Up

“Hyra’s concepts challenge readers to interrogate their applicability, and for this reason they would be excellent to debate in policy circles or undergraduate classrooms. Race, Class, and Politics in the Cappuccino City starts essential conversations about the importance of social connections within changing neighborhoods. It is a worthy introduction to urban theory, twenty first century development trends, and the history Washington, D.C., for scholarly and public audiences alike.”
— Edge Effects

"Hyra is a scholar activist par excellence––he worked as an organizer in DC for many years; his frontline experience, sensitivity and understanding is evident through the book. He is also an ethnographer in the tradition of Swedish anthropologist Ulf Hannerz and US anthropologist Elliot Liebrow, who produced classics based on Washington, DC’s Shaw/U Street neighbourhood. Also looking at DC’s Shaw/U Street neighbourhood, Hyra sets out to investigate the complex strategies people adopt as they struggle to survive, no longer just surviving in poverty as in the 1960s, but now also surviving the threats from gentrification. . . . Hyra’s book is political, but in a grounded and more strategic way. This is a great book which all critical urbanists should read."

"Race, Class, and Politics in the Cappuccino City is a significant accomplishment. Given the timeliness of the complex issues it engages, it ought to be read widely within and beyond the academy."

"Race, Class, and Politics in the Capuccinno City by Derek Hyra focuses on whether gentrification benefits low-income residents who remain in place. Hyra’s core argument is that the poor rarely benefit from gentrification. . . . The book benefits from its ethnographic approach. Hyra was able to probe into the dynamics of neighborhood change at the level of the individual household better than more quantitative studies. . . . I would consider this book to be among the top two recently published social science books, the other being Evicted by Matt Desmond (2016). Cappuccinno City will be an excellent supplementary text for planning, urban studies, and related fields."

"Derek Hyra’s Race, Class, and Politics in the Cappuccino City is a welcome and necessary addition to this growing line of inquiry. Hyra’s exploration of gentrification in Washington, D.C.’s Shaw/U Street neighborhood presents a multifaceted account of the process by which iconic ‘‘dark ghettos’’ are transformed into ‘‘gilded ghettos’’ and the implications of the process for longtime black residents. . . . This book is an invaluable resource for scholars and students of cities, policy-makers, and those interested in Washington, D.C.’s distinctive political and economic history."

"Race, Class, and Politics in the Cappuccino City offers a detailed and very well- written account of Washington, DC, in the specificity of the Shaw/U Street neighborhood. Author Derek Hyra takes the reader on a journey of the redevelopment and gentrification of this neighborhood through local and intimate stories."
— Aysegul Can