Vanished Giants: The Lost World of the Ice Age (Hardcover) 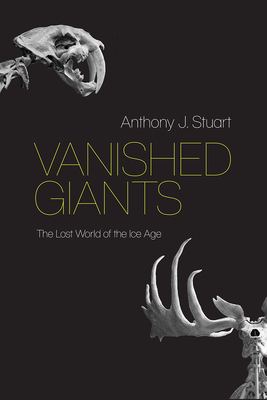 Vanished Giants: The Lost World of the Ice Age (Hardcover)


Backordered
Featuring numerous illustrations, this book explores the many lessons to be learned from Pleistocene megafauna, including the role of humans in their extinction, their disappearance at the start of the Sixth Extinction, and what they might teach us about contemporary conservation crises.

Long after the extinction of dinosaurs, when humans were still in the Stone Age, woolly rhinos, mammoths, mastodons, sabertooth cats, giant ground sloths, and many other spectacular large animals that are no longer with us roamed the Earth. These animals are regarded as “Pleistocene megafauna,” named for the geological era in which they lived—also known as the Ice Age.

In Vanished Giants: The Lost World of the Ice Age, paleontologist Anthony J. Stuart explores the lives and environments of these animals, moving between six continents and several key islands. Stuart examines the animals themselves via what we’ve learned from fossil remains, and he describes the landscapes, climates, vegetation, ecological interactions, and other aspects of the animals’ existence. Illustrated throughout, Vanished Giants also offers a picture of the world as it was tens of thousands of years ago when these giants still existed. Unlike the case of the dinosaurs, there was no asteroid strike to blame for the end of their world. Instead, it appears that the giants of the Ice Age were driven to extinction by climate change, human activities—especially hunting—or both. Drawing on the latest evidence provided by radiocarbon dating, Stuart discusses these possibilities. The extinction of Ice Age megafauna can be seen as the beginning of the so-called Sixth Extinction, which is happening right now. This has important implications for understanding the likely fate of present-day animals in the face of contemporary climate change and vastly increasing human populations.
For more than thirty years, Anthony J. Stuart has focused on the extinction of Ice Age megafauna and has published extensively in scientific journals such as Nature, Quaternary Science Reviews, and Quaternary International. He has also contributed to popular science publications including New Scientist, Geoscientist, Pour La Science, Spektrum der Wissenschaft, and Grizmek’s Animal Life Encyclopedia and served as a consultant for the three-part BBC series Ice Age Giants.
"Stuart reveals the vibrant lives of Pleistocene megafauna, driven extinct by climate change and human hunters. Can lessons from the past halt a sixth mass extinction?"
— New Scientist, "Don't Miss"

"Woolly rhinos, mammoths, saber-toothed cats and other astounding animals once roamed the Earth. How did they live and what caused their extinction? This illustrated book delves into the world of the Pleistocene with lessons about our current conservation crises."
— Bookseller

“Deft and entertaining, Vanished Giants reveals the ‘hugest, fiercest, and strangest’ Ice Age animals—mastodons, saber-toothed cats, immense ground sloths, and other odd, extinct creatures. Relaying research in an accessible way and with informative illustrations, this enthralling paleontology text discusses megafauna in order of geographic regions and in the context of disparate climates, habitats, and human settlements. . . . Stuart’s conclusions about global extinction patterns are as fascinating and complex as the species he examines themselves, and his reflections about how similar forces threaten so many large animals today makes this an important and captivating book.”
— Rachel Jagareski

"Vanished Giants provides a fascinating introduction to the Ice Age biota and a judicious assessment of the nature and causes of the megafaunal extinctions during the last 100,000 years."
— Metascience

“Clearly written by an author with a long pedigree working on these animals, this is an interesting overview of the Ice Age megafauna and its extinction in the Pleistocene and Holocene. Vanished Giants is superior to other books in the field in providing much more detail on the animals themselves. Stuart has produced thorough coverage of all the extinct megafauna with a description (usually with an illustration) and discussion of their lifestyles. He also discusses the debate on the causes of these extinctions, which for many years have been polarized into human-driven—often called the Blitzkrieg hypothesis—and climate-driven causes. It is a fascinating topic and surely one of the most intense ongoing debates in science, certainly in paleontology.”
— Paul Wignall, professor of paleoenvironments, University of Leeds

“We are very quick to blame species decline on human action. Although this is certainly the cause today, it is not necessarily the case historically. Stuart raises the potential for more localized events, providing evidence of small meteorite impacts, hyperdisease, and more, for the decline of Ice Age megafaunal communities around the globe. This is fascinating. Stuart discusses different species and different regions that were affected, starting with Eurasia, then heading to North America, the most famous region with the most recognized species to go extinct: mammoth, ground sloth, camelids, sabretooth cats. The conclusions are broad because, as Stuart points out, there is not a straightforward answer to the question. The illustrations are superb, and with the sheer inclusivity of time, geography, and species covered, Vanished Giants really enhances the field. An excellent book.”
— Neil Gostling, lecturer in evolution and paleobiology, University of Southampton