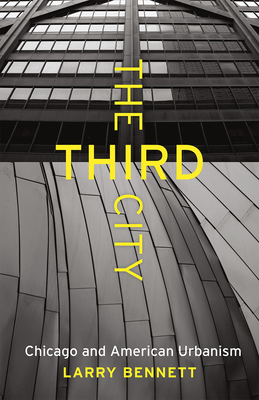 Our traditional image of Chicago—as a gritty metropolis carved into ethnically defined enclaves where the game of machine politics overshadows its ends—is such a powerful shaper of the city’s identity that many of its closest observers fail to notice that a new Chicago has emerged over the past two decades. Larry Bennett here tackles some of our more commonly held ideas about the Windy City—inherited from such icons as Theodore Dreiser, Carl Sandburg, Daniel Burnham, Robert Park, Sara Paretsky, and Mike Royko—with the goal of better understanding Chicago as it is now: the third city.

Bennett calls contemporary Chicago the third city to distinguish it from its two predecessors: the first city, a sprawling industrial center whose historical arc ran from the Civil War to the Great Depression; and the second city, the Rustbelt exemplar of the period from around 1950 to 1990. The third city features a dramatically revitalized urban core, a shifting population mix that includes new immigrant streams, and a growing number of middle-class professionals working in new economy sectors. It is also a city utterly transformed by the top-to-bottom reconstruction of public housing developments and the ambitious provision of public works like Millennium Park. It is, according to Bennett, a work in progress spearheaded by Richard M. Daley, a self-consciously innovative mayor whose strategy of neighborhood revitalization and urban renewal is a prototype of city governance for the twenty-first century. The Third City ultimately contends that to understand Chicago under Daley’s charge is to understand what metropolitan life across North America may well look like in the coming decades.

Larry Bennett is professor of political science at DePaul University. He is the author and coauthor of numerous books, including Fragments of Cities: The New American Downtowns and Neighborhoods, Neighborhood Politics: Chicago and Sheffield, and It’s Hardly Sportin’: Stadiums, Neighborhoods, and the New Chicago.

"Bennett is deep down a Chicagoan and it shows in this book. On the other hand, he is a clear-eyed and objective academic who uses the city not only as the object of his academic affections but also as a lens with which to assess a full range of the urban literature as both tool and critical subject. In short, The Third City is a rich and critical mix of urban study, academic literature, and Chicago experience."
— Journal of Urban Affairs

"The Third City brings together a lifetime of observation, reading, and discussion about Chicago, theories of urban
life, and the relationship between the two. . . .Bennett should be applauded for advancing our understanding of this great city and for challenging us to move urban theory from the past to the future."
— Perspectives on Politics

“Larry Bennett’s ability to convey the essence as well as the particularities—and peculiarities—of twenty-first-century Chicago is truly impressive. That he is also a most engaging writer makes The Third City not only accessible but pleasurable as well.”

“Larry Bennett’s The Third City provides a first-rate account of the ways that the second Mayor Daley has transformed the image of Chicago. Both succinct and wide-ranging, the book strikes an exemplary balance between nuanced observation of the city’s political history and deft evaluation of diverse urban development theories that attempt to explain Chicago’s trajectory. The result is an engagingly written, ceaselessly questioning, fair-minded tale of urban reinvention. For those wondering how and why Chicago has been able to move past the ‘second city’ Rust Belt decline that has paralyzed so many other former industrial powerhouses, this book is a great place to seek answers.”

“Chicago is a city that has produced so many grand narratives spun by boosters, writers, planners, and politicians that a historical work, whatever its quality, might easily get lost. That will not happen with this marvelous book. There is a genius to Larry Bennett’s method. He has sifted through the many interpretations of Chicago to produce his own highly original account of how, over the course of a century, the city has managed to arrive at its latest experiment with a uniquely American brand of urbanism.”

"Scholars of cities have long recognized the importance of Chicago—the ‘American’ city—embodying something of every epoch of U.S. urbanism. In his book The Third City political scientist Larry Bennett, too, places Chicago in the enduring pantheon of these American urbanism(s). As such, this study takes its place along side the very best on the American city. Just as discussions of Chicago by such luminaries as Mike Royko, Milton Rakove, Arnold Hirsch, and Adam Cohen and Elizabeth Taylor have added indelibly to our understanding of the American city, so too does this contribution by Larry Bennett give us at once a glimpse of the past and, even more important, a fully realized sense of the present and our urban future. In a broad-ranging and highly original treatment of Chicago, Bennett places this city, its past, present and future, very clearly at the forefront of what it takes to understand American cities and the literature concerned with their analysis."