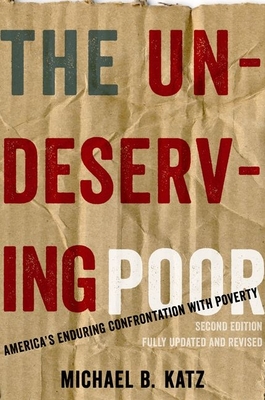 By Michael B. Katz


Not On Our Shelves—Ships in 1-5 Days
First published in 1989, The Undeserving Poor was a critically acclaimed and enormously influential account of America's enduring debate about poverty. Taking stock of the last quarter century, Michael B. Katz's new edition of this classic is virtually a new book. As the first did, it will
force all concerned Americans to reconsider the foundations of our policies toward the poor, especially in the wake of the Great Recession that began in 2008. Katz highlights how throughout American history, the poor have been regarded as undeserving: people who do not deserve sympathy because they brought their poverty on themselves, either through laziness and immorality, or because they are culturally or mentally deficient. This long-dominant view sees
poverty as a personal failure, serving to justify America's mean-spirited treatment of the poor. Katz reminds us, however, that there are other explanations of poverty besides personal failure. Poverty has been written about as a problem of place, of resources, of political economy, of power, and of
market failure. Katz looks at each idea in turn, showing how they suggest more effective approaches to our struggle against poverty. The Second Edition includes important new material. It now sheds light on the revival of the idea of culture in poverty research; the rehabilitation of Daniel Patrick Moynihan; the resurgent role of biology in discussions of the causes of poverty, such as in The Bell Curve; and the human rights
movement's intensified focus on alleviating world poverty. It emphasizes the successes of the War on Poverty and Great Society, especially at the grassroots level. It is also the first book to chart the rise and fall of the underclass as a concept driving public policy. A major revision of a landmark study, The Undeserving Poor helps readers to see poverty-and our efforts to combat it--in a new light.

Michael B. Katz was the Walter H. Annenberg Professor of History at the University of Pennsylvania. The author of Why Don't American Cities Burn?, The Price of Citizenship: Redefining the American Welfare State, and In the Shadow of the Poorhouse: A Social History of Welfare in America, he was apast-president of the History of Education Society and the Urban History Association. The first edition of The Undeserving Poor was a semi-finalist for the Robert F. Kennedy Book Award and a finalist for the American Sociological Association's Distinguished Book Award.