Inequality and Instability: A Study of the World Economy Just Before the Great Crisis (Hardcover) 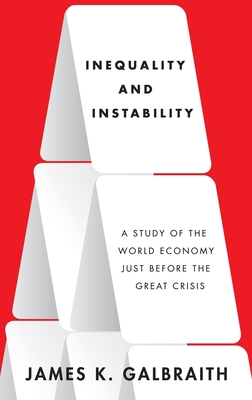 Inequality and Instability: A Study of the World Economy Just Before the Great Crisis (Hardcover)


Not On Our Shelves—Ships in 1-5 Days
As Wall Street rose to dominate the U.S. economy, income and pay inequalities in America came to dance to the tune of the credit cycle. As the reach of financial markets extended across the globe, interest rates, debt, and debt crises became the dominant forces driving the rise of economic inequality almost everywhere. Thus the "super-bubble" that investor George Soros identified in rich countries for the two decades after 1980 was a super-crisis for the 99 percent-not just in the U.S. but the entire world. Inequality and Instability demonstrates that finance is the driveshaft that links inequality to economic instability. The book challenges those, mainly on the right, who see mysterious forces of technology behind rising inequality. And it also challenges those, mainly on the left, who have placed the blame narrowly on trade and outsourcing. Inequality and Instability presents straightforward evidence that the rise of inequality mirrors the stock market in the U.S. and the rise of finance and of free-market policies elsewhere. Starting from the premise that fresh argument requires fresh evidence, James K. Galbraith brings new data to bear as never before, presenting information built up over fifteen years in easily understood charts and tables. By measuring inequality at the right geographic scale, Galbraith shows that more equal societies systematically enjoy lower unemployment. He shows how this plays out inside Europe, between Europe and the United States, and in modern China. He
explains that the dramatic rise of inequality in the U.S. in the 1990s reflected a finance-driven technology boom that concentrated incomes in just five counties, very remote from the experience of most Americans-which helps explain why the political reaction was so slow to come. That the reaction is occurring now, however, is beyond doubt. In the aftermath of the Great Financial Crisis, inequality has become, in America and the world over, the central issue. A landmark work of research and original insight, Inequality and Instability will change forever the way we understand this pivotal topic.

James K. Galbraith is professor at the Lyndon B. Johnson School of Public Affairs, the University of Texas at Austin, where he holds the Lloyd M. Bentsen Jr. Chair in Government/Business Relations. He is a leading economist whose books include The Predator State, Inequality and Industrial Change, and Created Unequal.