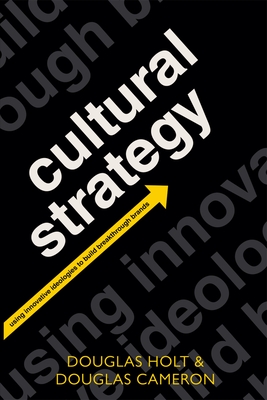 
Not On Our Shelves—Ships in 1-5 Days
How do we explain the breakthrough market success of businesses like Nike, Starbucks, Ben & Jerry's, and Jack Daniel's? Conventional models of strategy and innovation simply don't work. The most influential ideas on innovation are shaped by the worldview of engineers and economists - build a better mousetrap and the world will take notice. Holt and Cameron challenge this conventional wisdom and take an entirely different approach: champion a better ideology and the world will take notice as well. Holt and Cameron build a powerful new theory of cultural innovation. Brands in mature categories get locked into a form of cultural mimicry, what the authors call a cultural orthodoxy. Historical changes in society create demand for new culture - ideological opportunities that upend this orthodoxy. Cultural innovations repurpose cultural content lurking in subcultures to respond to this emerging demand, leapfrogging entrenched incumbents. Cultural Strategy guides managers and entrepreneurs on how to leverage ideological opportunities: - How managers can use culture to out-innovate their competitors
- How entrepreneurs can identify new market opportunities that big companies miss
- How underfunded challengers can win against category Goliaths
- How technology businesses can avoid commoditization
- How social entrepreneurs can develop businesses that appeal to more than just fellow activists
- How subcultural brands can break out of the 'cultural chasm' to mass market success
- How global brands can pursue cross-cultural strategies to succeed in local markets
- How organizations can maximize their innovation capabilities by avoiding the brand bureaucracy trap Written by leading authorities on branding in the world today, along with one of the advertising industry's leading visionaries, Cultural Strategy transforms what has always been treated as the "intuitive" side of market innovation into a systematic strategic discipline.

Douglas Holt was Professor of Marketing at both the Harvard Business School and the University of Oxford. He is now President of the Cultural Strategy Group, a consulting firm that provides brand strategy and innovation solutions using the cultural strategy framework. He is a leading expert on brand strategy, having established cultural branding as an important new strategy tool in his best-selling book How Brands Become Icons: The Principles of Cultural Branding. He has developed cultural strategies for a wide range of brands, includingCoca-Cola, Microsoft, Ben & Jerry's, Sprite, Jack Daniel's, MINI, MasterCard, Fat Tire beer, Qdoba, Georgia Coffee, Planet Green, and Mike's Hard Lemonade, along with a number of non-profit organizations. He holds degrees from Stanford, the University of Chicago, and Northwestern, and is the editor of the Journal of Consumer Culture. He has been invited to give talks at universities and management seminars worldwide, including the Global Economic Forum in Davos Douglas Cameron is Co-Founder and Chief Strategy Officer for Amalgamated, an influential non-traditional advertising agency known for developing content across multiple media platforms. He has developed brand strategies and campaign ideas for a wide range of clients, including Ben & Jerry's, Clearblue, Coca-Cola, Fat Tire beer, FOX Sports, Freelancers Union, Fuse Music Television, Mike's Hard Lemonade, Sprite, and Svedka vodka. He began his career at Cliff Freeman & Partners, the most lauded creative shop of its time. He entered the world of marketing inadvertently: travelling the world as a bagpiper, he was invited by David Ogilvy to perform at his French castle. Ogilvy insisted he take up advertising. He graduated from Dartmouth College, where he received the English department's top graduating honour.