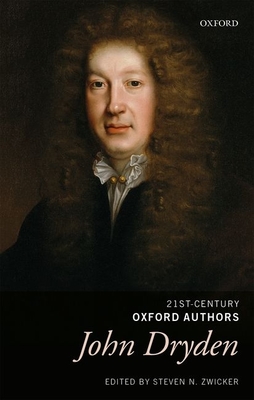 
Not On Our Shelves—Ships in 1-5 Days
This volume in the 21st Century Oxford Authors series offers students an authoritative, comprehensive selection of the poetry and prose of John Dryden, the most important poet, dramatist, translator, and literary theorist of the later seventeenth century. He wrote across the tumultuous decades of political and cultural revolution -- years stretching from the end of the Cromwellian Protectorate in 1659 through the reign of William III -- and he addressed the crucial events of those decades. These were years of unprecedented political revolution, and of a remarkable transformation of English literary culture, with John Dryden at the literary centre. He invented new literary modes including the theatre of spectacle known as heroic drama; he perfected the heroic couplet, a form that became the chief instrument of public poetry; he adapted works of Shakespeare and Milton; he wrote excoriating satire; he brought the translation of classical poetry to new levels of perfection; and
throughout his career he wrote works of literary theory that defined his own practices and the literary ethos of his age. By the time that Dryden died in 1700 he had redefined English literary culture; his work recalled and embodied all the genres and modes of early modern literature and anticipated the brilliance of eighteenth-century satire. This edition represents the span of a long career in its remarkable variety. All the genres in which Dryden wrote are represented: panegyrics, lyrics, odes, epigrams, verse epistles, historical poems, commendatory verse, commemorative poems, religious poems, satires, plays, prologues and epilogues, translations, critical prose, dedications, prefaces, biography, and letters. Explanatory notes and commentary enhance the study, understanding, and enjoyment of these works, and the edition includes an Introduction to the life and works of Dryden, a Chronology and a Biographical Appendix.
Steven N. Zwicker, Washington University, St Louis Steven N. Zwicker was born in California and graduated from UCLA and Brown University. He is Stanley Elkin Professor in the Humanities and Professor of English at Washington University where he has directed many literary programmes, including the Literature and History Program; the Mellon Postdoctoral Program; the Mellon Summer Dissertation Seminar Program; and most recently the Vertical Seminar Program. He has held visiting appointments at the Institute for Advanced Study, Princeton, Doshisha University, Kyoto, Japan, and the California Institute of Technology and was British Academy Visiting Lecturer at the Universities of Liverpool and Aberdeen.