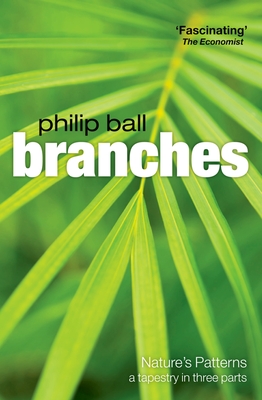 
Special Order—Subject to Availability
As part of a trilogy of books exploring the science of patterns in nature, acclaimed science writer Philip Ball here looks at the form and growth of branching networks in the natural world, and what we can learn from them. Many patterns in nature show a branching form - trees, river deltas, blood vessels, lightning, the cracks that form in the glazing of pots. These networks share a peculiar geometry, finding a compromise between disorder and determinism, though some, like the hexagonal snowflake or the stones of the Devil's Causeway fall into a rigidly ordered structure. Branching networks are found at every level in biology - from the single cell to the ecosystem. Human-made networks too can come to share the same features, and if they don't, then it might be profitable to make them do so: nature's patterns tend to arise from economical solutions.

Philip Ball is a freelance writer and a consultant editor for Nature, where he previously worked as an editor for physical sciences. He is a regular commentator in the scientific and popular media on science and its interactions with art, history and culture. His ten books on scientific subjects include The Self-Made Tapestry: Pattern Formation in Nature, H2O: A Biography of Water, The Devil's Doctor: Paracelsus and the World of Renaissance Magic and Science, and Critical Mass: How One Thing Leads To Another, which won the 2005 Aventis Prize for Science Books. He was awarded the 2006 James T. Grady - James H. Stack award by the American Chemical Society for interpreting chemistry for the public. Philip studied chemistry at Oxford and holds a doctorate in physics from the University of Bristol. His latest book The Music Instinct published in February 2010.