Adonis to Zorro: Oxford Dictionary of Reference and Allusion (Hardcover) 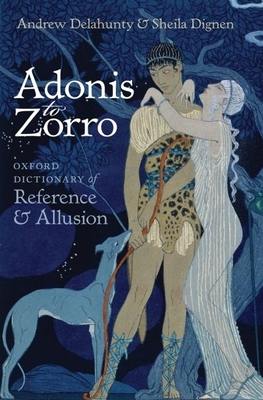 Adonis to Zorro: Oxford Dictionary of Reference and Allusion (Hardcover)


Special Order—Subject to Availability
Allusions are a colorful extension to the English language, drawing on our collective knowledge of literature, mythology, and the Bible to give us a literary shorthand for describing people, places, and events. A cunning crook is an Artful Dodger, a daydreamer is like Billy Liar, a powerful woman is a modern-day Amazon - we can suffer like Sisyphus, fail like Canute, or linger like the smile of the Cheshire Cat. This absorbing and accessible A-Z explains the meanings of allusions in modern English, from Adonis to Zorro, Tartarus to Tarzan, and Rubens to Rambo. Fascinating to browse, the book is based on an extensive reading program that has identified the most commonly-used allusions. For the third edition all entries have been reviewed, revised, and updated to ensure the consistency of coverage of allusions and references, and to make sure all entries have at least one illustrative citation from an even wider range of source materials: from Aldous Huxley to Philip Roth, and Emily Bronte. The new edition also includes a useful bibliography to help readers explore the world of references and allusions further. The Oxford Dictionary of Reference and Allusion is both a useful and user-friendly reference work for students of English Literature and Language, as well as for non-native English speakers who need explanations of unusual references, and an absorbing browseable volume for all lovers of literature and culture in general.
Andrew Delahunty is a freelance lexicographer and dictionary editor. His publications include the Longman Dictionary of English Language and Culture (1992), the Oxford Guide to English Usage (with Edmund Weiner, 1994), the Longman Business English Dictionary (2000), and the Oxford Advanced Learner's Dictionary (6th edn, 2000). Sheila Dignen is a freelance lexicographer who has worked on the Longman Dictionary of English Language and Culture (1992), the Dorling Kindersley Illustrated Children's Dictionary (1994), the Chambers Junior Illustrated Dictionary (1997), and the Longman Business English Dictionary (2000).