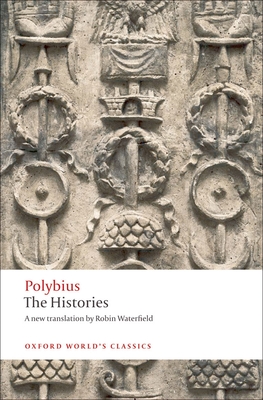 
Not On Our Shelves—Ships in 1-5 Days
Here is the first new translation for over thirty years of Polybius' Histories, the major source for our knowledge of the Eternal City's early rise to power, covering the years of the Second Punic War, the defeat of Hannibal, and Rome's pivotal victories in the Mediterranean. Polybius, himself a leading Greek politician of the time, attributes Rome's success to the greatness of its constitution and the character of its people, but also allows Fortune a role in shaping world events. This new translation by Robin Waterfield includes the first five books in their entirety, and all of the fragmentary Books 6 and 12. Brian McGing's lucid introduction discusses the period covered by the Histories, Polybius' major role in the reconstruction of Greece after the defeat of the Achaean League, the themes and subject matter of the individual books, Polybius' outspoken views on how (and how not), and his significance for historiography. The book also includes succinct, clear notes, maps, a
glossary, and an index of proper names. About the Series: For over 100 years Oxford World's Classics has made available the broadest spectrum of literature from around the globe. Each affordable volume reflects Oxford's commitment to scholarship, providing the most accurate text plus a wealth of other valuable features, including expert introductions by leading authorities, voluminous notes to clarify the text, up-to-date bibliographies for further study, and much more.

Robin Waterfield is an author and translator. His many acclaimed translations for OWC include Plato's Republic and five other Plato translations, Plutarch, Herodotus, Aristotle, Xenophon and Euripides. Brian McGing has written articles on the Hellenistic period and recently completed a book on Polybius. He is Regius Professor of Greek at Trinity College Dublin.