Just Another Southern Town: Mary Church Terrell and the Struggle for Racial Justice in the Nation's Capital (Hardcover) 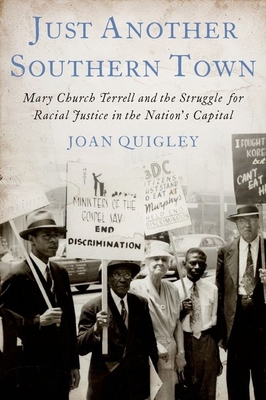 Just Another Southern Town: Mary Church Terrell and the Struggle for Racial Justice in the Nation's Capital (Hardcover)


Not On Our Shelves—Ships in 1-5 Days
(This book cannot be returned.)
In January of 1950, Mary Church Terrell, an 86-year-old charter member of the NAACP, headed into Thompson's Restaurant, just a few blocks from the White House, and requested to be served. She and her companions were informed by the manager that they could not eat in his establishment, because
they were colored. Terrell, a former suffragette and one of the country's first college-educated African American women, took the matter to court. Three years later, the Supreme Court vindicated her outrage: District of Columbia v. John R. Thompson Co., Inc. was decided in June 1953, invalidating
the segregation of restaurants and cafes in the nation's capital. In Just Another Southern Town, Joan Quigley recounts an untold chapter of the civil rights movement: an epic battle to topple segregation in Washington, the symbolic home of American democracy. At the book's heart is the formidable Mary Church Terrell and the test case she mounts seeking to enforce
Reconstruction-era laws prohibiting segregation in D.C. restaurants. Through the prism of Terrell's story, Quigley reassesses Washington's relationship to civil rights history, bringing to life a pivotal fight for equality that erupted five years before Rosa Parks refused to move to the back of a
Montgomery bus and a decade before the student sit-in movement rocked segregated lunch counters across the South. At a time when most civil rights scholarship begins with Brown v. Board of Education, Just Another Southern Town unearths the story of the nation's capital as an early flashpoint on race. A rich portrait of American politics and society in the mid-20th century, it interweaves Terrell's narrative
with the courtroom drama of the case and the varied personalities of the justices who ultimately voted unanimously to prohibit segregated restaurants. Resonating with gestures of courage and indignation that radiate from the capital's streets and sidewalks to its marble-clad seats of power, this
work restores Mary Church Terrell and the case that launched a crusade to their rightful place in the pantheon of civil rights history.

Joan Quigley is a lawyer and journalist who lives outside of Washington, D.C. She is the author of The Day the Earth Caved In: An American Mining Tragedy.