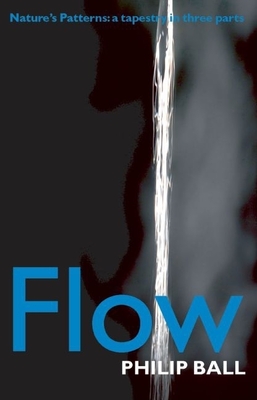 
Special Order—Subject to Availability
From the swirl of a wisp of smoke to eddies in rivers, and the huge persistent storm system that is the Great Spot on Jupiter, we see similar forms and patterns wherever there is flow - whether the movement of wind, water, sand, or flocks of birds. It is the complex dynamics of flow that structures our atmosphere, land, and oceans. Part of a trilogy of books exploring the science of patterns in nature by acclaimed science writer Philip Ball, this volume explores the elusive rules that govern flow - the science of chaotic behavior.

Philip Ball is a freelance writer and a consultant editor for Nature, where he previously worked as an editor for physical sciences. He is a regular commentator in the scientific and popular media on science and its interactions with art, history and culture. His ten books on scientific subjects include The Self-Made Tapestry: Pattern Formation in Nature, H2O: A Biography of Water, The Devil's Doctor: Paracelsus and the World of Renaissance Magic and Science, and Critical Mass: How One Thing Leads To Another, which won the 2005 Aventis Prize for Science Books. He was awarded the 2006 James T. Grady - James H. Stack award by the American Chemical Society for interpreting chemistry for the public. Philip studied chemistry at Oxford and holds a doctorate in physics from the University of Bristol. His latest book The Music Instinct published in February 2010.