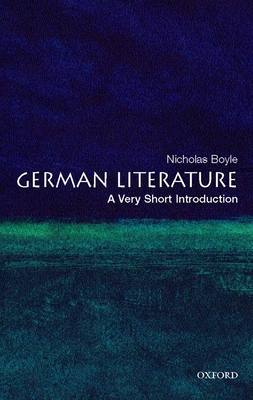 
Backordered
German literature in all genres and from all historical periods has exerted an enormous influence on the history of western thought. From Martin Luther, Frederick Schiller, and Johann Wolfgang von Goethe to Karl Marx, Sigmund Freud, Thomas Mann, Bertolt Brecht, and Gunter Grass, Germany has produced an impressive number of great writers and great works. In German Literature: A Very Short Introduction, Nicholas Boyle illuminates the particular character and power of German literature and explores its impact on the larger cultural world. Boyle presents an engrossing tour of German literature from the Middle Ages to the 20th century, focussing especially on the last 250 years. He examines key themes like idealism, modernism, materialism, trauma and memory, showing how they have imbued the great German writers with such distinctive voices. Indeed, this brief introduction offers broad coverage of German literature, revealing the links between German literature and the German nation, examining the literary and philosophical responses of German writers to social, political, and economic change, and seeking out the connections between Germany's intellectual traditions and its often violent and tragic history. About the Series: Combining authority with wit, accessibility, and style, Very Short Introductions offer an introduction to some of life's most interesting topics. Written by experts for the newcomer, they demonstrate the finest contemporary thinking about the central problems and issues in hundreds of key topics, from philosophy to Freud, quantum theory to Islam.

Nicholas Boyle is Professor of German Literary and Intellectual History at Cambridge University. He has so far published two volumes of his prizewinnning biography, Goethe: the Poet and the Age, and his most recent book is Sacred and Secular Scriptures: a Catholic approach to literature published in 2004, based on the Erasmus Lectures which he delivered at Notre Dame University. Professor Boyle was awarded the Goethe Medal of the Goethe-Institut, is a Fellow of the British Academy, and holds an honorary degree from Georgetown University in Washington DC.