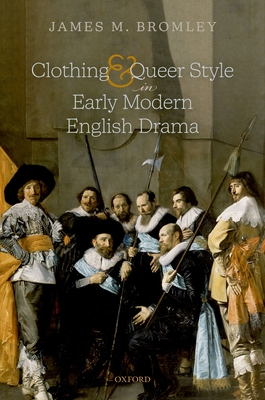 
Backordered
This book examines early modern drama's depiction of non-standard forms of masculinity grounded in superficiality, inauthenticity, affectation, and the display of the extravagantly clothed body. Practices of extravagant dress destabilized distinctions between able-bodied and disabled, human and non-human, and the past and present, distinctions that structure normative ways of thinking about sexuality. In city comedies by Ben Jonson, George Chapman, Thomas Middleton, and Thomas Dekker, extravagantly dressed male characters imagine alternatives to the prevailing modes of subjectivity, sociability, and eroticism in early modern London. While these characters are situated in hostile narrative and historical contexts, this book draws on recent work on disability, materiality, and queer temporality to rethink their relationship to those contexts in order to access the world-making possibilities of early modern queer style. In their rich representations of life in London around the turn
of the seventeenth century, these plays not only were, but also remain, uniquely sensitive to the intersection of sexuality, urbanization, and material culture. The attachments and pleasures of early modern sartorial extravagance they depict can estrange us from the epistemologies that narrow current thinking about sexuality's relationship to authenticity, pedagogy, interiority, and privacy.

James M. Bromley, Associate Professor of English, Miami University James M. Bromley is Associate Professor of English at Miami University. He is the author of Intimacy and Sexuality in the Age of Shakespeare (2012) and co-editor of Sex before Sex: Figuring the Act in Early Modern England (2013). He has been awarded a Solmsen Fellowship at the Institute for Research in the Humanities at the University of Wisconsin and a Mellon Foundation Fellowship from the Folger Shakespeare Library.