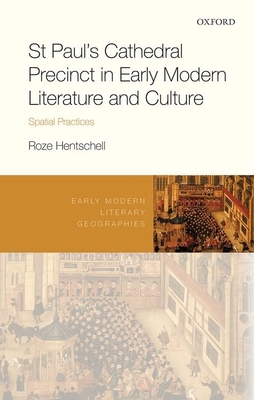 
Not On Our Shelves—Ships in 1-5 Days
Prior to the 1666 fire of London, St Paul's Cathedral was an important central site for religious, commercial, and social life in London. The literature of the period - both fictional and historical - reveals a great interest in the space, and show it to be complex and contested, with multiple functions and uses beyond its status as a church. St Paul's Cathedral Precinct in Early Modern Literature and Culture: Spatial Practices animates the cathedral space by focusing on the every day functions of the building, deepening and sometimes complicating previous works on St Paul's. St Paul's Cathedral Precinct in Early Modern Literature and Culture is a study of London's cathedral, its immediate surroundings, and its everyday users in early modern literary and historical documents and images, with special emphasis on the late sixteenth and early seventeenth centuries. It discusses representations of several of the seemingly discrete spaces of the precinct to reveal how these spaces overlap with and inform one another spatially, and argues that specific locations should be seen as mutually constitutive and in a dynamic and ever-evolving state. The varied uses of the precinct, including the embodied spatial practices of early modern Londoners and visitors, are examined, including the walkers in the nave, sermon-goers, those who shopped for books, the residents of the precinct, the choristers, and those who were devoted to church repairs and renovations.