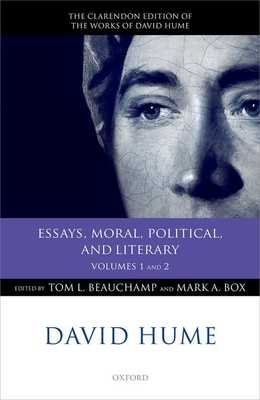 
Not On Our Shelves—Ships in 1-5 Days
This is the first critical edition ever produced of Essays, Moral, Political, and Literary by David Hume, who is widely widely considered to be the most important British philosopher and an author celebrated for his moral, political, historical, and literary works. The editors' Introduction is primarily historical and written for advanced students and scholars from many disciplines. It is neither an orientation to Hume's philosophy nor an introduction aimed at philosophers. It is not an attempt to interpret Hume's text, but rather discusses the genesis, revision, and reception of the essays, which went into many editions at the author's hand. The annotations provide information about Hume''s sources, allusions, and citations, as well as background facts pertinent to an informed reading of the essays. The primary goal is to aid readers in their interpretations of the text. This edition also includes a detailed commentary on Hume's essay 'On the Populousness of Ancient Nations', which will be of special interest to ancient historians. The two volumes present a full critical edition, in every respect. They assemble a massive amount of historical and textual information never previously published. The editorial apparatus is comprehensive and includes extensive historical and bibliographical detail. The Clarendon Edition of the Works of David Hume as a whole is on the cutting-edge of editorial work in the history of great works in the eighteenth century. This edition will quickly become a necessary addition to the library of any scholar who works on David Hume's Essays.

Tom L. Beauchamp, Georgetown University, Mark A. Box, University of Alaska Fairbanks Tom L. Beauchamp is Emeritus Professor of Philosophy at Georgetown University. His research interests are in the history of modern philosophy, in particular the works of David Hume. He is the editor of three previously published OUP volumes in The Clarendon Hume editions of the works of Hume, co-author with Alexander Rosenberg of Hume and the Problem of Causation, and has published scholarly articles on Hume in areas of metaphysics, epistemology, ethics, philosophy of mind, and history of modern philosophy. Mark A. Box is Emeritus Professor of Philosophy at the University of Alaska Fairbanks. He taught English literature at the University of Alaska Fairbanks from 1990 through 2010. His research interests have been in Hume's writings and in bibliography.