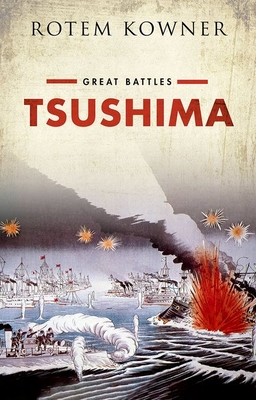 
On Our Shelves Now at:
The Battle of Tsushima was the most decisive naval engagement in the century that elapsed since the Battle of Trafalgar in 1805. Although these two battles are often compared, the Battle of Tsushima, in which the Japanese Imperial Navy defeated the Russian Imperial Navy, was also unprecedented in many ways. It marks the first naval victory of an Asian power over a major European power; the most devastating defeat suffered by the Imperial Russian Navy in its entire history; and the only truly decisive engagement between two battleship fleets in modern times. In addition, the Battle of Tsushima was also the most decisive naval engagement of the Russo-Japanese War and one that exerted a major impact on the course of that war. Its impact was so dramatic, in fact, that the two belligerents concluded a peace agreement within three months of the battle's conclusion. At the same time, and because it involved two of the world's largest fleets, the influence this battle exerted was both far reaching and long standing. In subsequent years, the symbolic victory of an "Eastern" power over Tsarist Russia using modern technology was feared and celebrated in both the Western and the Colonial worlds. Similarly, and in both Japan and Russia, the Battle of Tsushima had a prolonged impact on their respective navies as well as on their geopolitical ambitions in Asia and beyond. By relying on a diverse array of primary sources, this book examines the battle in depth and is the first to offer a penetrating analysis of its global impact as well as the way its memory has evolved in both Japan and Russia.

Rotem Kowner, Professor of Japanese Studies, Department of Asian Studies, University of Haifa, Israel Rotem Kowner is Professor of Japanese Studies and Naval History at the University of Haifa and a leading expert on the Russo-Japanese War. A founder and first chair of the Department of Asian Studies at the University of Haifa, his research interests include wartime behaviour in modern Japan, questions of race and racism in East Asia, and modern naval history. During the last two decades, Professor Kowner has written extensively and led joint research projects on the Russo-Japanese War, and in so doing played a major role in bringing this conflict and its global repercussions back into historical consideration.