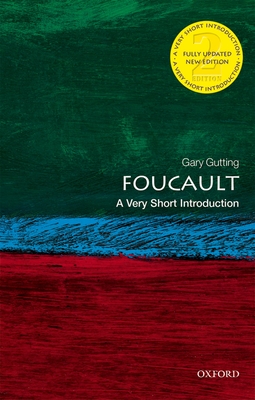 
Not On Our Shelves—Ships in 1-5 Days
Born in 1926 in France, Foucault is one of those rare philosophers who has become a cult figure. Over the course of his life he dabbled in drugs, politics, and the Paris SM scene, all whilst striving to understand the deep concepts of identity, knowledge, and power. From aesthetics to the penal system; from madness and civilisation to avant-garde literature, Foucault was happy to reject old models of thinking and replace them with versions that are still widely debated today. A major influence on Queer Theory and gender studies (he was openly gay and died of an AIDS-related illness in 1984), he also wrote on architecture, history, law, medicine, literature, politics, and of course philosophy. In this Very Short Introduction Gary Gutting presents a wide-ranging but non-systematic exploration of some highlights of Foucault's life and thought. Beginning with a brief biography to set the social and political stage, he then tackles Foucault's thoughts on literature, in particular the avant-garde scene; his philosophical and historical work; his treatment of knowledge and power in modern society; and his thoughts on sexuality. This new edition includes feminist criticisms of Foucault's apparently sexist treatment of the Jouy case, as well as a new chapter offering a unified overview of the College de France lectures, now a major focus of interest in Foucault. ABOUT THE SERIES: The Very Short Introductions series from Oxford University Press contains hundreds of titles in almost every subject area. These pocket-sized books are the perfect way to get ahead in a new subject quickly. Our expert authors combine facts, analysis, perspective, new ideas, and enthusiasm to make interesting and challenging topics highly readable.

Gary Gutting is John A. O'Brien Chair in Philosophy (Emeritus) at the University of Notre Dame, and is considered a leading expert on Foucault. Since the first edition of the Foucault VSI was published he has written many books, including Thinking the Impossible: French Philosophy Since 1960 (OUP, 2011), and What Philosophers Know: Case Studies in Recent Analytic Philosophy (CUP, 2009).