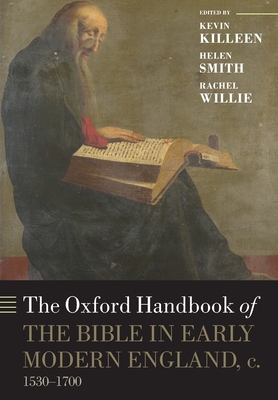 
Not On Our Shelves—Ships in 1-5 Days
(This book cannot be returned.)
The Bible was, by any measure, the most important book in early modern England. It preoccupied the scholarship of the era, and suffused the idioms of literature and speech. Political ideas rode on its interpretation and deployed its terms. It was intricately related to the project of natural philosophy. And it was central to daily life at all levels of society from parliamentarian to preacher, from the 'boy that driveth the plough', famously invoked by Tyndale, to women across the social scale. It circulated in texts ranging from elaborate folios to cheap catechisms; it was mediated in numerous forms, as pictures, songs, and embroideries, and as proverbs, commonplaces, and quotations. Bringing together leading scholars from a range of fields, The Oxford Handbook of the Bible in Early Modern England, 1530-1700 explores how the scriptures served as a generative motor for ideas, and a resource for creative and political thought, as well as for domestic and devotional life. Sections tackle the knotty issues of translation, the rich range of early modern biblical scholarship, Bible dissemination and circulation, the changing political uses of the Bible, literary appropriations and responses, and the reception of the text across a range of contexts and media. Where existing scholarship focuses, typically, on Tyndale and the King James Bible of 1611, The Oxford Handbook of the Bible in England, 1530-1700 goes further, tracing the vibrant and shifting landscape of biblical culture in the two centuries following the Reformation.

Kevin Killeen, Senior Lecturer, University of York, Helen Smith, Director, Centre for Renaissance and Early Modern Studies, University of York, Rachel Judith Willie, Lecturer, Liverpool John Moores University Kevin Killeen in Senior Lecturer in Renaissance Studies at the University of York. He has edited Sir Thomas Browne: 21st Century Authors (OUP, 2014), and is author of The Political Bible in Early Modern England (CUP, 2016) Biblical Scholarship, Science and Politics in Early Modern England: Thomas Browne and the Thorny Place of Knowledge (Ashgate, 2009; winner of the CCUE Book Prize, 2010) and co-editor, with Peter Forshaw, of Biblical Exegesis and the Emergence of Science in the Early Modern Era (Palgrave, 2007). He is currently editing two volumes for The Oxford Works of Sir Thomas Browne. Helen Smith is Reader in Renaissance Literature at the University of York. She is co-editor of Conversions: Gender and Religious Change in Early Modern Europe (Manchester University Press, 2017) with Simon Ditchfiled, and author of Grossly Material Things: Women and Book Production in Early Modern England (OUP, 2012; winner of the SHARP DeLong Book History Prize, 2013, and the Roland H. Bainton Literature Prize, 2013), and co-editor, with Louise Wilson, of Renaissance Paratexts (CUP, 2011). Helen is PI on the AHRC research network, 'Imagining Jerusalem, c. 1099 to the Present Day'. She is currently completing a monograph on early modern ideas of matter and their material expressions. Rachel Willie is Lecturer in English at Liverpool John Moores University. She is author of Staging the Revolution: Drama, Reinvention and History, 1647-1672 (Manchester University Press, 2015). She has published on Milton, Charles I, and martyrological discourse, and print and publishing in the nascent public sphere.