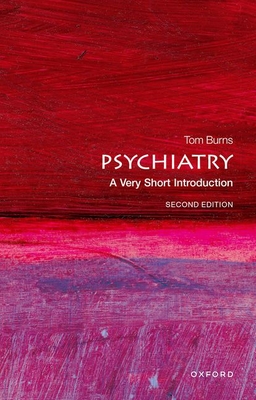 
On Our Shelves Now at:
Psychiatry is an endlessly controversial endeavor, incorporating emotively-charged questions over the reality of mental illness, the medicalization of everyday life, and the role of nature versus nurture which cause constant discussion today, and on which almost everyone has an opinion. In this Very Short Introduction Tom Burns explores the nature of psychiatry, focusing on what it can and cannot do, and discussing why its history has been beset by dramatic shifts in emphasis and types of treatment. Considering the main disorders that have shaped its practice (such as schizophrenia and manic depression), he analyzes how it differs from (and overlaps with) psychology and psychotherapy. Many of the controversies arise from its dual origin 200 years ago and the separate development of psychiatry with a more "medical" approach in the asylums, rather than the psychological approach which birthed psychoanalysis and various forms of psychotherapy. Discussing philosophical issues of psychiatry's legitimacy, Burns explores the mistakes psychiatry has made and the blind alleys in its history, before looking forward to the likely changes in its practice with the coming of artificial intelligence and virtual reality. ABOUT THE SERIES: The Very Short Introductions series from Oxford University Press contains hundreds of titles in almost every subject area. These pocket-sized books are the perfect way to get ahead in a new subject quickly. Our expert authors combine facts, analysis, perspective, new ideas, and enthusiasm to make interesting and challenging topics highly readable.

Tom Burns trained as a psychiatrist in Scotland and London before working as a general adult consultant in Sweden and London. He became Professor of Community Psychiatry in 1993, before becoming Professor of Social Psychiatry at the University of Oxford in 2003. His publications include OurNecessary Shadow: The Nature and Meaning of Psychiatry (Penguin, 2014) and Outreach in Community Mental Health Care (OUP, 2017). In 2006, Tom was awarded a CBE for services to mental health.