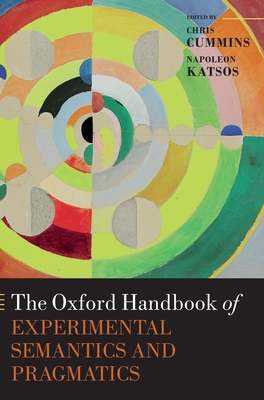 
Not On Our Shelves—Ships in 1-5 Days
(This book cannot be returned.)
This handbook is the first to explore the growing field of experimental semantics and pragmatics. In the past 20 years, experimental data has become a major source of evidence for building theories of language meaning and use, encompassing a wide range of topics and methods. Following an introduction from the editors, the chapters in this volume offer an up-to-date account of research in the field spanning 31 different topics, including scalar implicatures, presuppositions, counterfactuals, quantification, metaphor, prosody, and politeness, as well as exploring how and why a particular experimental method is suitable for addressing a given theoretical debate. The volume's forward-looking approach also seeks to actively identify questions and methods that could be fruitfully combined in future experimental research. Written in a clear and accessible style, this handbook will appeal to students and scholars from advanced undergraduate level upwards in a range of fields, including semantics and pragmatics, philosophy of language, psycholinguistics, computational linguistics, cognitive science, and neuroscience.

Chris Cummins is a Lecturer at the University of Edinburgh. He previously worked at Bielefeld University, having received his PhD from the University of Cambridge. His research interests include the pragmatic interpretation of quantity expressions, and how this bears upon reasoning and decision-making; he has also published on the topics of presupposition, speech acts and metaphor. He is the author of Constraints on Numerical Expressions (OUP 2015). Napoleon Katsos is a Reader in Experimental Pragmatics at the University of Cambridge. He was among the first generation of PhD researchers to be trained in experimental pragmatics and took part in related networks, such as Euro-XPrag, XPrag-UK, and XPrag-De. He is interested in how we learn, process, and use the meaning of words and sentences, with emphasis on quantification and implicature. He draws relevant evidence from linguistic theory and experimental psychology, including sentence processing and typical or atypical language acquisition by monolingual or bilingual children.