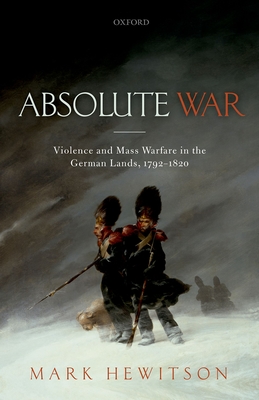 
Special Order—Subject to Availability
Wars have played a fundamental part in modern German history. Although infrequent, conflicts involving German states have usually been extensive and often catastrophic, constituting turning-points for Europe as a whole. Absolute War is the first in a series of studies from Mark Hewitson that explore how such conflicts were experienced by soldiers and civilians during wartime, and how they were subsequently imagined and understood during peacetime, from Clausewitz and Kleist to Junger and Adorno. Without such an understanding, it is difficult to make sense of the dramatic shifts characterising the politics of Germany and Europe over the past two centuries. The studies argue that the ease - or reluctance - with which Germans went to war, and the far-reaching consequences of such wars on domestic politics, were related to soldiers' and civilians' attitudes to violence and death, as well as to long-term transformations in contemporaries' conceptualisation of conflict. Absolute War reassesses the meaning of military conflict for the millions of German subjects who were directly implicated in the Revolutionary and Napoleonic Wars. Based on a re-reading of contemporary diaries, letters, memoirs, official correspondence, press reports, pamphlets, treatises, plays, and cartoons, this volume refocuses attention on combat and conscription as the central components of new forms of mass warfare. It concentrates, in particular, on the impact of violence, killing, and death on many soldiers' and some civilians' experiences and subsequent memories of conflict. War has often been conceived of as 'an act of violence pushed to its utmost bounds', as Clausewitz put it, but the relationship between military conflicts and violent acts remains a problematic one.

Mark Hewitson is a Professor of German History and Politics, and Director of European Social and Political Studies at University College London. His publications include monographs on National Identity and Political Thought in Germany (2000), Germany and the Causes of the First World War (2004), Nationalism in Germany, 1848-1866 (2010), and History and Causality (2014). He is the co-editor of What is a Nation? Europe, 1789-1914 (2006, with Timothy Baycroft), and of Europe in Crisis: Intellectuals and the European Idea, 1917-1957 (2012, with Matthew D'Auria).