A Handbook of Diction for Singers: Italian, German, French (Paperback) 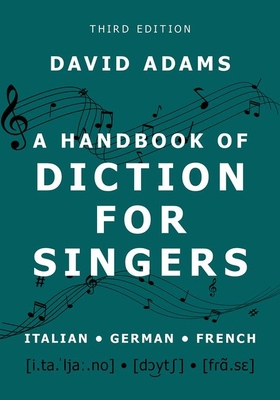 A Handbook of Diction for Singers: Italian, German, French (Paperback)


Not On Our Shelves—Ships in 1-5 Days
Now in its third edition, A Handbook of Diction for Singers is a complete guide to achieving professional levels of diction in Italian, German, and French. Combining traditional approaches in the teaching of diction with new material not readily available elsewhere, author David Adams presents the sounds of each language in logical order, along with essential information on matters such as diacritical marks, syllabification, word stress, and effective use of the variety of foreign-language dictionaries. A Handbook of Diction for Singers places particular emphasis on the characteristics of vowel length, the sequencing of sounds between words, as well as the differences between spoken and sung sounds in all three languages, all while taking care to clarify concepts typically difficult for English-speaking singers. This revised third edition offers significantly expanded coverage of each language as well as a new chapter that introduces readers to the specific sounds unique to those
languages. The result is a concise yet thorough treatment of the three major languages of the classical vocal repertory, and an invaluable reference for vocalists and voice teachers.

David Adams is Professor Emeritus of the College-Conservatory of Music, University of Cincinnati, where he served on the voice faculty from 1980 until 2015. He also served as administrative head of the Performance Studies Division for 27 years. He sang as lyric tenor in operas and concerts in Italy, Austria, Germany, and the United States. He was artistic director of the summer programs OperaTheater and Music Festival of Lucca and CCM Spoleto. Former students of his have enjoyed professional careers in North America, Europe, and Asia