The Problem of Democracy: America, the Middle East, and the Rise and Fall of an Idea (Hardcover) 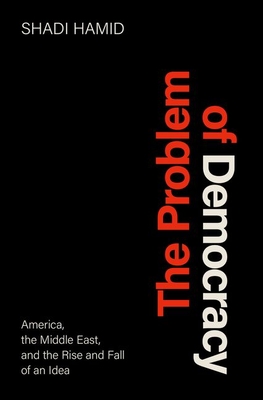 The Problem of Democracy: America, the Middle East, and the Rise and Fall of an Idea (Hardcover)


On Our Shelves Now at:
Shadi Hamid reimagines the ongoing debate on democracy's merits and proposes an ambitious agenda for reviving the lost art of democracy promotion in the world's most undemocratic regions. What happens when democracy produces bad outcomes? Is democracy good because of its outcomes or despite them? This democratic dilemma is one of the most persistent, vexing problems for America abroad, particularly in the Middle East--we want democracy in theory but not necessarily in practice. When Islamist parties rise to power through free elections, the United States has too often been ambivalent or opposed, preferring instead pliable dictators. With this legacy of democratic disrespect in mind, and drawing on new interviews with top American officials, Shadi Hamid explores universal questions of morality, power, and hypocrisy. Why has the United States failed so completely to live up to its own stated ideals in the Arab world? And is it possible for it to change? In The Problem of Democracy, Hamid offers an ambitious reimagining of this ongoing debate and argues for democratic minimalism as a path to resolving democratic dilemmas in the Middle East and beyond. In the seemingly eternal tension between democracy and liberalism, recognized by the ancient Greeks and the American founders alike, it may be time to prioritize one over the other, rather than acting as if the two are intertwined when increasingly they are not. At the end of the Cold War, the democratic idea was victorious, so much so that it took on more meaning than it could bear. Democracy became a means to other ends, whether it was liberalism, economic development, or cultural progress. What if, instead, democracy was reconceptualized as its own end? What if the people are right even when they're wrong? The problem of democracy is no longer just a Middle Eastern problem. The polarizing effects of identity, culture, and religion are now haunting the world's oldest democracies. At home, a growing number of Americans are realizing that respecting election results when the other side wins is easier said than done. To look then at the democratic dilemma abroad is to consider a deeper set of questions around why we believe democracy is good as well as whether we think it is good for other nations and cultures.

Shadi Hamid is a senior fellow at the Brookings Institution, research professor of Islamic Studies at Fuller Seminary, and a contributing writer at The Atlantic. He was named one of the world's top 50 thinkers by Prospect magazine in 2019. Hamid is the author of Islamic Exceptionalism: How the Struggle Over Islam is Reshaping the World, which was shortlisted for the 2017 Lionel Gelber Prize for best book on foreign affairs, and co-editor of Rethinking Political Islam. His first book, Temptations of Power: Islamists and Illiberal Democracy in a New Middle East, was named a Foreign Affairs Best Book of 2014.