Live Music in America: A History from Jenny Lind to Beyoncé (Paperback) 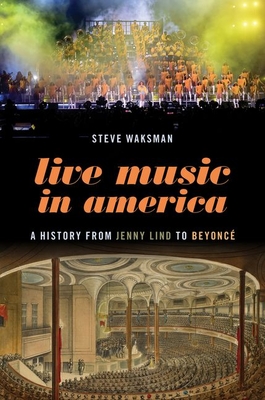 Live Music in America: A History from Jenny Lind to Beyoncé (Paperback)


Not On Our Shelves—Ships in 1-5 Days
(This book cannot be returned.)
When the Swedish concert singer Jenny Lind toured the U.S. in 1850, she became the prototype for the modern pop star. Meanwhile, her manager, P.T. Barnum, became the prototype for another figure of enduring significance: the pop culture impresario. Starting with Lind's fabled U.S. tour and winding all the way into the twenty-first century, Live Music in America surveys the ongoing impact and changing conditions of live music performance in the U.S. It covers a range of historic performances, from the Fisk Jubilee Singers expanding the sphere of African American music in the 1870s, to Benny Goodman bringing swing to Carnegie Hall in 1938, to 1952's Moondog Coronation Ball in Cleveland - arguably the first rock and roll concert - to Beyonc 's boundary-shattering performance at the 2018 Coachella festival. More than that, the book details the roles played by performers, audiences, media commentators, and a variety of live music producers (promoters, agents, sound and stage
technicians) in shaping what live music means and how it has evolved. Live Music in America connects what occurs behind the scenes to what takes place on stage to highlight the ways in which live music is very deliberately produced and does not just spontaneously materialize. Along the way, author Steve Waksman uses previously unstudied archival materials to shed new light on the origins of jazz, the emergence of rock 'n' roll, and the rise of the modern music festival.

Steve Waksman is Elsie Irwin Sweeney Professor of Music at Smith College, Massachusetts. His publications include the books Instruments of Desire: The Electric Guitar and the Shaping of Musical Experience (1999), and This Ain't the Summer of Love: Conflict and Crossover in Heavy Metal and Punk (2009), the latter of which was awarded the 2010 Woody Guthrie Award for best scholarly book on popular music by the U.S. chapter of the International Association for the Study of Popular Music (IASPM-US). With Reebee Garofalo, he is the co-author of the sixth edition of the rock history textbook, Rockin' Out: Popular Music in the U.S.A. (2014), and with Andy Bennett, he co-edited the SAGE Handbook of Popular Music (2015). His essays have appeared in such collections as the Cambridge Companion to the Guitar, Listen Again: A Momentary History of Pop, Metal Rules the Globe, and The Relentless Pursuit of Tone: Timbre and Popular Music. On WRSI radio, The River in Western Massachusetts, he can beheard as the Doctor of Rock, offering bits of popular music history in support of Black History Month and Women's History Month.