The Case for Rage: Why Anger Is Essential to Anti-Racist Struggle (Hardcover) 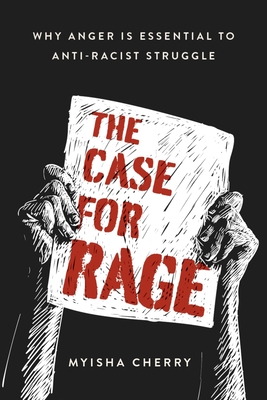 The Case for Rage: Why Anger Is Essential to Anti-Racist Struggle (Hardcover)


In Stock—Click for Locations
When it comes to injustice, especially racial injustice, rage isn't just an acceptable response-it's crucial in order to fuel the fight for change. Anger has a bad reputation. Many people think that it is counterproductive, distracting, and destructive. It is a negative emotion, many believe, because it can lead so quickly to violence or an overwhelming fury. And coming from people of color, it takes on connotations that are even more sinister,
stirring up stereotypes, making white people fear what an angry other might be capable of doing, when angry, and leading them to turn to hatred or violence in turn, to squelch an anger that might upset the racial status quo. According to philosopher Myisha Cherry, anger does not deserve its bad reputation. It is powerful, but its power can be a force for good. And not only is it something we don't have to discourage, it's something we ought to cultivate actively. People fear anger because they paint it in broad strokes,
but we can't dismiss all anger, especially not now. There is a form of anger that in fact is crucial in the anti-racist struggle today. This anti-racist anger, what Cherry calls Lordean rage, can use its mighty force to challenge racism: it aims for change, motivates productive action, builds
resistance, and is informed by an inclusive and liberating perspective. People can, and should, harness Lordean rage and tap into its unique anti-racist potential. We should not suppress it or seek to replace it with friendly emotions. If we want to effect change, and take down racist structures and
systems, we must manage it in the sense of cultivating it, and keeping it focused and strong. Cherry makes her argument for anti-racist anger by putting Aristotle in conversation with Audre Lorde, and James Baldwin in conversation with Joseph Butler. The Case for Rage not only uses the tools of philosophy to articulate its arguments, but it sharpens them with the help of social psychology
and history. The book is philosophically rich and yet highly accessible beyond philosophical spheres, issuing an urgent call to all politically and socially engaged readers looking for new, deeply effective tools for changing the world. Its message will resonate with the enraged and those witnessing
such anger, wondering whether it can help or harm. Above all, this book is a resource for the activist coming to grips with a seemingly everyday emotion that she may feel rising up within her and not know what to do with. It shows how to make sure anger doesn't go to waste, but instead leads to
lasting, long-awaited change.

Myisha Cherry is Assistant Professor of Philosophy at the University of California, Riverside. Her books include UnMuted: Conversations on Prejudice, Oppression, and Social Justice (Oxford University Press, 2018) and, co-edited with Owen Flanagan, The Moral Psychology of Anger (Rowman & Littlefield, 2019). Her work on emotions and race has appeared in The Atlantic, Boston Review, Los Angeles Times, Salon, Huffington Post, WomanKind, and New Philosopher. She has also offered social commentary on race for BBC Radio, BET, and other outlets. Cherry is also the host of the UnMute Podcast, where sheinterviews philosophers about the social and political issues of our day. Her book The Failures of Forgiveness is forthcoming with Princeton University Press.