Sea and Land: An Environmental History of the Caribbean (Paperback) 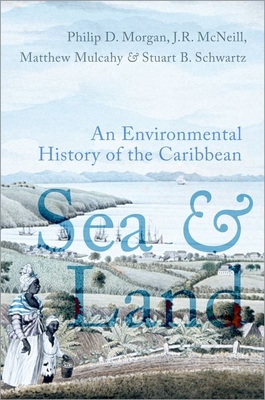 Sea and Land: An Environmental History of the Caribbean (Paperback)


Not On Our Shelves—Ships in 1-5 Days
(This book cannot be returned.)
Sea and Land provides an in-depth environmental history of the Caribbean to ca 1850, with a coda that takes the story into the modern era. It explores the mixing, movement, and displacement of peoples and the parallel ecological mixing of animals, plants, microbes from Africa, Europe, elsewhere in the Americas, and as far away as Asia. It examines first the arrival of Native American to the region and the environmental transformations that followed. It then turns to the even more dramatic changes that accompanied the arrival of Europeans and Africans in the fifteenth century. Throughout it argues that the constant arrival, dispersal, and mingling of new plants and animals gave rise to a creole ecology. Particular attention is given to the emergence of Black slavery, sugarcane, and the plantation system, an unholy trinity that thoroughly transformed the region's demographic and physical landscapes and made the Caribbean a vital site in the creation of the modern western world. Increased attention to issues concerning natural resources, conservation, epidemiology, and climate have now made the environment and ecology of the Caribbean a central historical concern. Sea and Land is an effort to integrate that research in a new general environmental history of the region. Intended for scholars and students alike, it aims to foster both a fuller appreciation of the extent to which environmental factors shaped historical developments in the Caribbean, and the extent to which human actions have transformed the biophysical environment of the region over time. The combined work of eminent authors of environment and Latin American and Caribbean history, Sea and Land offers a unique approach to a region characterized by Edenic nature and paradisiacal qualities, as well as dangers, diseases, and disasters.