Changed for Good: A Feminist History of the Broadway Musical (Paperback) 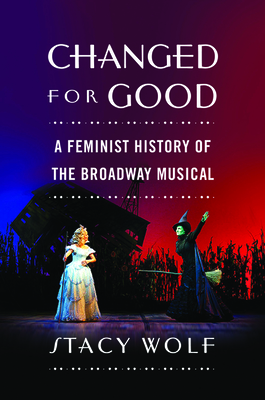 Changed for Good: A Feminist History of the Broadway Musical (Paperback)


Not On Our Shelves—Ships in 1-5 Days
(This book cannot be returned.)
From Adelaide in Guys and Dolls to Nina in In the Heights and Elphaba in Wicked, female characters in Broadway musicals have belted and crooned their way into the American psyche. In this lively book, Stacy Wolf illuminates the women of American musical theatre - performers, creators, and characters -- from the start of the cold war to the present day, creating a new, feminist history of the genre. Moving from decade to decade, Wolf first highlights the assumptions that circulated about gender and sexuality at the time. She then looks at the leading musicals to stress the key aspects of the plays as they relate to women, and often finds overlooked moments of empowerment for female audience members. The musicals discussed here are among the most beloved in the canon--West Side Story, Cabaret, A Chorus Line, Phantom of the Opera, and many others--with special emphasis on the blockbuster Wicked. Along the way, Wolf demonstrates how the musical since the mid-1940s has actually been dominated by women--women onstage, women in the wings, and women offstage as spectators and fans.

Stacy Wolf is Professor of Theater and Director of the Princeton Atelier, Lewis Center for the Arts, Princeton University.