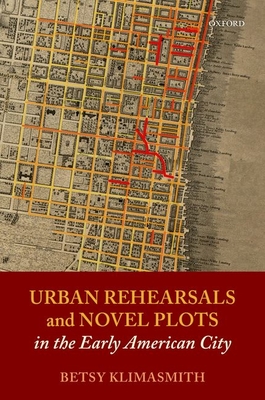 
Not On Our Shelves—Ships in 1-5 Days
Urban Rehearsals and Novel Plots in the Early American City sheds new light on the literature of the early US by exploring how literature, theatre, architecture, and images worked together to allow readers to imagine themselves as urbanites even before cities developed. In the four decades
following the Revolutionary War, the new nation was a loose network of nascent cities connected by print. Before a national culture could develop, local city cultures took shape; literary texts played key roles in helping new Americans become city people. Drawing on extensive archival research, Urban Rehearsals argues that literature, particularly novels and plays, allowed Bostonians to navigate the transition from colonial town to post-revolution city, enabled Philadelphians to grieve their experiences of the 1793 Yellow Fever epidemic and rebuild
in the epidemic's aftermath, and showed New Yorkers how the domestic practices that reinforced their urbanity could be opened to the broader public. Throughout, attention to underrepresented voices and texts calls attention to the possibilities for women, immigrants, and Black Americans in
developing urban spaces, while showing how those possibilities would be foreclosed as the nation developed. Balancing attention to canonical texts of the early Republic, including The Power of Sympathy, Charlotte Temple, and Benjamin Franklin's Autobiography, with novels whose depiction of early cities deserves greater attention, such as Ormond, The Boarding-School, Monima, and Kelroy, this volume shows
how US cities developed on the pages and stages of the early Republic, building urban imaginations that would construct the nation's early cities.